Health at your fingertips: what nails tell about your health 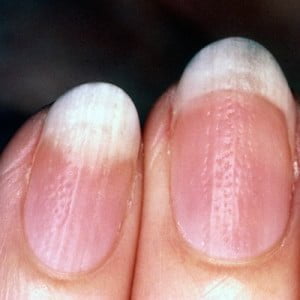 Gauging people’s health from the way they look it’s fairly common practice as one’s outer condition reflects what is going on inside the body. The skin, which is our largest organ, takes two other forms: the hair and the nails. Whilst the hair can look damaged due to procedures such as dyeing and straightening and to the products used to take care of it, nails are a good indicator of one’s health. Depending on how your fingernails look, a professional can infer what is going on inside the body and act promptly to reverse the situation. The trained eye will be able to detect problems related to the heart, liver or even the lungs. So what do your nails tell you about your health?

A person with extremely pale nails might be suffering from problems such as malnutrition, anaemia and congestive heart failure. When nails are really white with a darker rim you can suspect liver problems like hepatitis.

In most cases, when nails turn yellow it’s an indicator of a fungal infection. This infection may cause the nail bed to retract as the nail might thicken and eventually crumble. In rare cases, yellow nails may indicate other conditions like psoriasis, diabetes or severe thyroid disease.

When nails turn bluish, the person is not getting enough oxygen. This implies that there is a problem with respect to the supply of oxygen to different parts of the body, which can be linked to either lung or heart problems.

The surface of a healthy nail is supposed to be uniform without pits. If there are pits on the nails, then you can suspect a psoriasis infection or inflammatory arthritis. It’s also common that the skin under the nail becomes discoloured turning reddish-brown.

Sometimes the nail may look fine but the skin itself may show some puffiness around it. This issue may have to do with some problems at the connective tissue level. It might be that the nail fold is inflamed. This usually happens to those suffering from a connective tissue disorder such as Lupus. As the fold gets more inflamed, it can redden.

Dark lines beneath the nail

If you have dark lines on your nails, you should consult a doctor as soon as possible. This might be a sign of a dangerous type of cancer called melanoma.

Gnawed nails are not really a sign of a disease but rather a sign of bad habit. You probably enjoy biting your nails. This may not really be a bad thing but in some cases it may indicate that a person is anxious. Anxiety is not good for the health. Another psychological problem nail biting may be linked to is obsessive-compulsive disorder. In any case, it is advisable to see a specialist to help you deal with it.

Albeit an easy aspect to monitor, the look of your nails is only one indicator of your health. Normally, alterations to the nails are not the first sign of a disease, so pay attention to changes in your body. Finally, even if your nails have changed colour or look, it doesn’t mean that there’s something wrong. If you re worried, you should see a doctor.