In the powerful documentary exposing the dramatic implications of environmental destruction and the disappearance of one of the most essential and perfected creatures in existence, Vanishing of the Bees (Hive Mentality Films) takes a look at what happens when a bee is out of sync with nature.

Exploring different theories as to why there has been a dramatic decrease in the world-wide population of bees, Vanishing of the Bees shows viewers the beauty and simplicity of the honeybee, the dangerous implications of its decline, and different perspectives on the root cause of colony collapse disorder. Once light has been shed on this terrifying trend, viewers cannot help but consider, “What can we do to save the bees?” 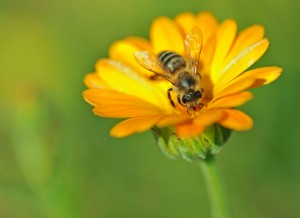 The “vanishing of the bees” phenomenon was named colony collapse disorder (CCD) in 2007 by a group of American scientists after examining a number of mysterious cases occurring across the country. CCD is the term used to describe the condition where virtually all bees of a colony disappear rapidly.

There are three elements of CCD:

Because of CCD, recent years have been marked by too few American bees to pollinate almond crops. Colonies of Australian bees have been imported to carry out this essential pollination, a completely unsustainable farming practice. It is an expensive endeavour, and the Australian bees are out of sync with the North American pollination season.

Systemic pesticides is the primary suspect in the cause of CCD. With widespread use starting in 2003—a few years before the emergence of CCD—this poison is considered sub-lethal to bees, meaning it doesn’t kill them directly but weakens their immune systems and alters their navigational abilities, seriously affecting their survival skills.

The EPA itself does not conduct any research from which to draw its conclusions, rather is presented with data collected by companies who stand to make a profit off the approval of its product. The problem with insufficient research like this is it doesn’t consider the residuals of the pesticides. Systemic pesticides are designed with long lasting residuals. Scientists wanting to solve the mystery of CCD suspect that once systemic pesticide enters the bees’ systems, it affects the developmental stages for a generation or more. 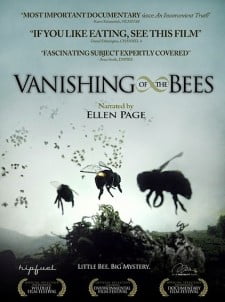 About a decade before the first reported cases of CCD in the US, France experienced a similar devastation to its bee colonies. Calling it “mad bee disease,” the phenomenon started shortly after farmers introduced systemic pesticides to their agricultural practices. Independent research led beekeepers to consider the dangerous implications of this insecticide.

This prompted French beekeepers to successfully sue Bayer, the maker of the systemic pesticide in question, for scientific proof. Following this monumental decision, the French government banned the use of systemic pesticides on certain crops. In the years since the ban was imposed, the honey bee population has dramatically increased in those areas where they were once depleted.

In the words of one French beekeeper:

The future of the bee, like water and energy, will define the ability of man to live on the planet.

Vanishing of the Bees is an extraordinary film featuring startling scientific research, fascinating discussions by researchers, and must-see footage of the amazing honey bee. With both conventional and holistic farming practices discussed, this documentary sets in motion a necessary discussion on the future of all levels of agriculture.

To learn more about this documentary, click > Vanishing of the Bees

Watch the Vanishing of the Bees Trailer

To learn more about this documentary, click > Vanishing of the Bees