Using CBT: My Journey with A Fearful Patient 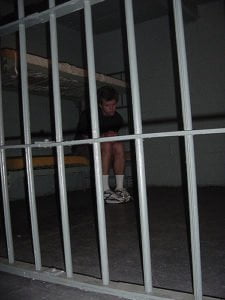 Everyone on earth has been afraid at some point in their lives. Little fears, like being stung by a bee that just flew in the window. Big fears, such as developing cancer or having a heart attack. Fear and anxiety are a normal part of being human. For the most part they guide and protect us, which is of course their purpose.

However, the patients who walk through my door have a different relationship with fear and anxiety. Many of them build their lives around avoiding specific things that cause them to feel extremely anxious. Anxious enough to result in a full-blown panic attack. These people live in a carefully constructed cage meant to protect them. If they put a foot outside of if they fall prey to crippling anxiety. For them, life is a constant, obsessive dance with the things they know will bring out the worst in their subconscious.

So it was with one particular man who contacted me some time ago in relation to an extreme fear. “L”, as I will call him, suffered from one of the most common fear disorders or “phobias” as they are known. He had a dreadful fear of social situations, something that psychologists simply refer to as “social anxiety”.

To be honest, L is an unremarkable man in terms of the way he looks. By that, I mean he is not an unusual man in his appearance. Believe it or not, many people with severe phobias don’t share that part of themselves voluntarily, and certainly you can’t tell by looking at them. Although it can feel to them as if everyone knows they are nervous or are having a panic attack, as an outsider you’d have to be pretty observant to notice the signs of fear and anxiety.

It had taken L quite a while to work up the courage to see me in person. I’m one of the few therapists that offer sessions over Skype and I also communicate via email. For people who don’t want to leave their homes thanks to one or another phobia, this provides a good starting point from which to work.

I’d been chatting to L for a while in a place where he felt comfortable. In fact, it turns out that L was rather outgoing hidden behind an anonymous internet username. It was when face to face that he became extremely self-conscious.

Working with L to get around his social anxiety was an intense process. I am an integrative therapist and draw on a number of models in my practice, but in this particular case, I knew that Cognitive Behavioural Therapy would be the most effective way forward.

An application of Cognitive Behavioural Therapy

Cognitive Behavioural Therapy (CBT), is the perfect approach to use in addressing issues such as phobias. CBT has many advantages, the main one being the profound results you can achieve within a short period of time. CBT isn’t concerned with a person’s history but focuses on the problem as it is in the here and now. So, when I was treating L, I didn’t really care what the historical reasons were for L’s fears. Even if we found some cause in his childhood or other part of his life, that wouldn’t suddenly make his phobia go away.

No, in order to heal L’s crippling inability to take part in social interactions I would have to walk a path with him that he’d been avoiding until now. The natural instinct of someone with a phobia is to avoid the things that trigger those unpleasant feelings. We would have to walk against the stream of intuition and purposefully expose L to exactly the sorts of thoughts and situations that make him suffer a breakdown.

We do this because L, like every other human being, has a natural method of dealing with constant fear: we get used to it. The theory is that by being repeatedly exposed to the things he fears, L would become used to the presence of his anxiety triggers.

We start off only in his imagination, I walk him through visualisation exercises where he imagines himself in the places and situations that he would usually avoid. I only do this once or twice, but L has to do his homework and visualise himself in these situations on his own time too. CBT is what is known as a directive approach, meaning that the client will be gently challenged in order to facilitate positive change. This can be in a variety of ways, and will more often than not require the client to engage in prescribed activity (usually homework), in between sessions.

When L gets used to this exercise and to the ideas put forward by the visualisation, we are ready to move on. It’s time for L to start putting himself into real social situations in order to face his fears and overcome them. To you and me this may not sound like a hard thing to do, but for L it can be a battle just to greet the cashier at the local service station. Especially if it happens to be an attractive one.

So, I give L homework to do. He has to set and meet a list of social interaction challenges. Starting with simple things like greeting or speaking to service staff at restaurants and other sorts of shops. Every time he does one of these he jumps on Skype soon after to discuss what it was like for him. We discuss the positives and the challenges he faced and we have to decide after each one whether we need to stay with what we’re doing, or if we need to change tack. CBT is very much about making changes to the plan if we don’t see the change we want.

It doesn’t take long before L starts to get comfortable with these minor social encounters. I’ve been doing this for many years and I’ve learnt what the point looks like before my client makes that final breakthrough.

The biggest challenge and the context that gives L the most panic, is to go out to a hangout where there are other single people. The inability to do this is one of the main reasons L was driven to seek therapy in the first place. This is the one place where the pressure to avoid social mistakes is the strongest. Luckily we have spent quite a bit of time imagining the worst, so that L could get used to it. He’s also learnt several relaxation techniques to curb the immediate feelings of anxiety in the moment.

It’s not long before I get the call that I’ve been expecting all along. L won’t need to come for further sessions, he feels OK now. He’ll keep up the exercises that I taught him, but he doesn’t feel he needs me at his side the whole time.

This is the bigger picture of what I do. Ultimately, I support my clients as I teach strategies and techniques to better manage their life, whatever that looks like for them. The point of therapy is to encourage your client to be autonomous and not enter into a co-dependant relationship with them, instead give them the tools for a healthier, happier life. Finally, he can get on with the business of his life and I can get on with helping the next person do the same.

You can learn more about different CBT techniques and applications by taking the CBT course offered by Globalcademy.com or contacting Libby Seery.