Warning: Your Tap Water Could Be Killing You

Guess what happens when you pour chlorinated tap water into a goldfish bowel? The fish die. Or so states a new report on subject of toxic chemicals in your tap water. Considered the “silent enemy” lurking inside your kitchen and bathrooms, chlorinated water, while supposedly killing all sorts of diseases like cholera and most harmful bacteria, can also be doing serious damage to the humans who drink it. After all, chlorine is a toxic disinfectant. 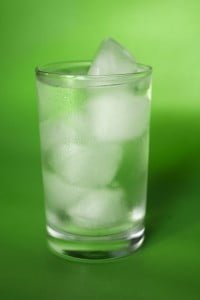 However, taken on its own, chlorine can be considered relatively safe. That is, when it’s used to disinfect swimming pools or in the engineering of pesticides and plastics. Even when ingested in a small amounts, chlorine is able to break down and harmful effects are minimal. But when the chemical reacts with other hard chemicals in the water such as toxic DBPs (disinfection byproducts), serious health problems can emerge.

There are two basic DBPs that can come from chlorine combining with organic materials. These are THMs (trihalomethanes) and HAAs (haloacetic acids). These are both considered “Cancer Group B carcinogens” since they are on record as having produced cancers in lab animals.

They are also said to possess 100 times the toxicity of chlorine and can also cause kidney and central nervous system damage, plus heart disease. What’s worse, is that there is evidence chlorinated water causes more than a few cancers.

Says the United States Council of Environmental Quality, the cancer risk for those people who use unfiltered chlorinated tap water is 93 percent higher than people who drink and wash in filtered water and/or bottled spring water.

Breast cancer sufferers are said to have up to 60 percent higher chlorination levels in their fatty tissue than woman who are cancer free. Or so states, BreastCancerFund.org.

Municipal water testing results can be misleading. While water companies test for some DBPs that might be in the water supply, the results are often not complete. Taken a step further, these companies are not always obligated to publish the totality of their results.

What this means is, despite what appears to be good data coming from the water organization, harmful chemical levels can very well exist. This can depend on where you live. The closer a residence is located to the water source, the higher the level of chlorine in the drinking water. Those who live on the edge of town, have less chlorine.

Your tap water might look perfectly fine. It might even smell and taste okay. But that doesn’t mean it’s not full of harmful toxins that can cause serious health problems down the road. If you can’t trust your water company’s test results, you should always assume the worst—that the water you drink, bathe in, wash your produce in, wash your clothes and dishes in, is filled with dangerous DBPs.

Water doesn’t just have to be ingested orally to be harmful. The Journal of Public Health claims that two-thirds of chlorine related diseases can be directly attributed to “skin absorption while showering.” That statistic alone should trigger alarm bells.

So, what’s the best way to protect yourself and your family against long-term ill effects of chlorinated water?” Install a whole-house water filtration system. But if you can’t afford that, at the very least, you need to install a budget friendly reverse osmosis water filter under sink system. You should, at the same time, install filters on all the showerheads.

Safe is Not Necessarily Healthy

Primalfoodstore.com asserts that “deluded health experts” often get the terms ‘healthy’ and ‘safe’ entirely confused. Chlorine is often added to water supplies not necessarily because it’s effective in the destruction of harmful bacteria, but because it’s cheap. But since it has proven an effective killer of viruses, protozoans, and dangerous pathogens, it is therefore considered a safe chemical for human beings to ingest to keep themselves happy and healthy.

Yet many water drinkers are still not aware that the chlorine in their tap water, along with heavy chemicals and minerals, can and will result in serious health problems directly related to DBPs. Studies have proven that chlorine will substantially increase your risk of several cancers, including breast cancer. And yet many health professionals have suggested that pregnant mothers drink tap water exclusively. This is because they view chlorinated water as being sterile, when in fact, it is extremely dangerous.

In the final analysis, the water you drink should enhance and prolong your life. Not destroy it.