As one of the most respected leaders in the field of Yoga therapy, Gary Kraftsow’s Viniyoga Therapy series is long overdue.

Because, as the DVD cover explains, nearly eighty percent of all Americans have or will experience back pain in their lives, we chose to review the Low Back, Sacrum and Hips DVD.

As a yoga instructor who also happens to have some low back issues, I was happy to give the Viniyoga Low Back series a try.

The World of Yoga 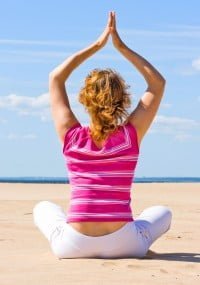 As you may know, the world of yoga is a vast one.

There are many types and styles and spins on the ancient practice. Some are more stylized, sweaty (think over 100 degrees), strict, or gentle than others.

In popular Asana (poses) the emphasis, in the US anyway, is typically on doing the pose “right.” While many studios and teachers encourage a loving, relaxed environment, there are still classes out there that feel like some sort of spiritual boot camp.

A Refuge for Anyone Who Desires a Healthy, Pain Free Low Back, Sacrum or Hips

Kraftsow’s Viniyoga, though, is quite the opposite. Because Viniyoga’s emphasis is on therapeutics and mindful breathing, it offers a refuge for anyone (beginning or experienced) who desires a healthy, pain-free low back, sacrum or hips.

The instructions are clear, well illustrated and well timed. The videos are easy to follow, never hurried, and perfectly sequenced. And, as an added benefit, once you have learned the poses visually, Kraftsow has included MP3 versions as well.

Though slightly put off by Kraftsow’s introduction—he didn’t really look like a yogi and sounded more like a doctor than any yoga teacher I have ever met—I went into the shortest (23 minutes) and easiest set with an open mind. I’ve learned from experience to let the body rather than the mind be the judge.

The Effects are Immediate, Time-Released, and Cumulative

After the set, I took a few steps and could already feel the effects. As Kraftsow says in the intro, the effects are immediate, time-released, and cumulative-the more you do them, the better you will feel. This set offers the simplest practice, and as Kraftsow says in the introduction, it is designed to improve the “pelvic lumbar rhythm in an effective and safe way.” After several years of low back issues, I felt like I had just discovered the rarest gem and am so pleased that Viniyoga therapy has made its way into my daily practice.

Perfect to Help Build Strength in the Hips 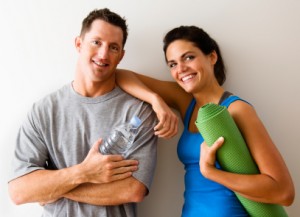 After a few weeks, I moved on to the hip section, and I loved that one too.

The Hip series offers another simple practice that emphasizes the hip from four perspectives, and is perfect to help build strength in the hips. Be careful with this one though: according to Kraftsow it may mildly irritate the low back or sacrum.

Before beginning any practice he does recommend seeing a professional, though he isn’t exactly clear about what kind. Basically, he says that if you have any acute symptoms (i.e. a slipped disc), you shouldn’t practice without “the guidance of a practitioner.” One can only assume that means a Viniyoga Practitioner.

Kraftsow is the Founder, Director and Senior Teacher of the American Viniyoga Institute’s Teacher and Therapist Trainings, so a few classes with a Viniyoga practitioner might not be a bad idea. If you don’t have access to one though, the Low Back series is worth the cost of the DVD even if you never do the Hip or Strength and Stability sets.

Strength and Stability to Help With Stamina 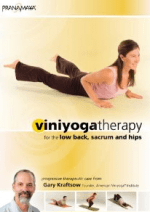 Which brings us to the final low back Strength and Stability session. This set is designed for people who are feeling stronger in the low back and want to maintain their low back health. It can also be used preventatively for those who have never had back issues. Ideal for building strength and stamina, this set is the most challenging of the three and may not be appropriate, at least initially, for those suffering from debilitating back pain.

In all, this DVD offers a fantastic solution to surgeries or medications and, as Kraftsow promises, if you do them regularly they will be as fundamental to your back health as brushing your teeth is to your dental health.

Gary Kraftsow is a wealth of wisdom and it is a blessing to have this series in a DVD format.

Upper Back, Neck, and Shoulders 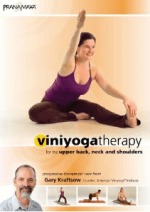 Although we didn’t review the Vinyoga therapy DVD for the shoulders, neck and upper back, we assume it is as high quality as the one for Low Back, Sacrum and Hips.

You can learn more and read over the excellent reviews. For anyone who sits at a computer and would like some good computer exercises, this yoga DVD would make a fine addition.