Syphilis: The symptoms, treatment and complications

Syphilis is a stubborn, highly contagious STD. This disease is caused by the spiral-shaped bacterium called Treponema pallidum. This bacterium can live almost anywhere in the body and spreads fast. Syphilis can last for several years and lead to serious health complications such as death.

It may also be transmitted from mother to baby through the placenta during pregnancy or at birth, resulting in congenital syphilis. The infection rates of syphilis is increased socio-economic issues, such as the lack by of education, poverty, and the lack of access to proper health care. 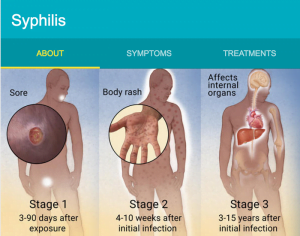 What is the symptoms?

The first sign of syphilis is a small, painless sore. It can appear on your sexual organs, rectum, or inside your mouth. This sore is called a chancre. People often fail to notice it right away. Plus, the problem with syphilis is that it is difficult to tell it apart from other diseases. Hence why it’s known as the great imitator. And you can be infected without showing any symptoms for years. Yet, the earlier you discover the infection, the better. Syphilis that remains untreated for a long time can cause major damage to important organs, like the heart and brain.

The disease has four stages:

Stage one, call primary syphilis begins with a small, round, painless sore which usually appears where the bacteria entered the body. This normally occurs about three weeks after infection, but can take up to three months. The chancre remains for about two to six weeks.

Stage 2, called secondary syphilis is mostly characterized by a sore throat and skin rashes on the palms of the hands and soles of the feet. The rashes could however appear anywhere on the body. Other symptoms include:

Eventually the symptoms will disappear, but the disease will remain.

Stage 3 is called latent syphilis. Symptoms disappear and, although you are still infected, there will be no noticeable signs that you have the disease. Secondary symptoms may reappear, but one can remain “on ice” for a number of years until tertiary syphilis occurs.

The last stage is called tertiary syphilis. This is stage can take up to 30 years to appear. Tertiary syphilis can be life-threatening and can lead to a number of apparently unrelated conditions like:

To diagnosis the disease you need to visit a doctor. The diagnosis will depend on the stage the infection is active. Besides a physical examination, the doctor will take a blood, serum, and plasma tests, collectively called a serologic tests, which can produce a diagnosis. But they might take a sample of the sore, if one is present. These test will test the presence of the syphilis bacteria, but in some cases they will test if the antibody reagin is present. This antibody is normally released by the immune system as a response by syphilis bacteria.

There are different tests, like the venereal disease research laboratory (VDRL) test and rapid plasma reagin (RPR) are used to detect the antibody called reagin, which is produced by the immune system’s response to Treponema pallidum infection. A false negative can occur if the tests are done during the first 3 to 6 weeks of infection. Alternatively a fluorescent treponemal antibody absorption (FTA) test can performed to detect treponemal-specific antibodies. FTA is a more sensitive test and thus a more reliable diagnostic tool during all stages of the disease. 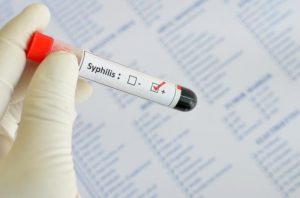 Penicillin is used for primary, secondary and early latent syphilis. Alternatively antibiotics like tetracycline, doxycycline, minocycline, erythromycin, and ceftriaxone are used, but maybe less effective. With 50% of patients in the primary and secondary phases will experience worsening symptoms, like anxiety, and exacerbated lesions. And those in the late stage’s damage will not be revised. And there is a high mortality rate due to the far-reaching effects of the disease on the central nervous system.

A follow-up, a year later, will be required to check if there is no bacteria in in the blood.

People with syphilis have a significantly increased chance of getting HIV. The sores the disease causes make it easier for HIV to enter the body.