Chancroid is cause by the bacteria Haemophilus ducreyi. This bacteria is transmitted during sexual intercourse and is visible as open sores on the female and male genitals, as well as on the mouth, throat, lips tongue and anus. The sores are formed as a reaction of the bacteria attacking the skin. These sores are also called a chancroid or ulcer.

This disease is more prevalent among countries with poor health care systems and sanitation condition such as in Africa, the Caribbean basin, and Southwest Asia. In developed nations it has almost been eliminated. But it is starting to raise once more in the United States.

Incubation period of chancroid is 12 hours to 14 days.

What are the symptoms?

Men and woman might experience different symptoms, but a common element is that the incubation period of chancroid is between 12 hours and 5 days after exposure.

Females can develop 4 or more red bumps on their labia (that is folds of skin that cover the female genitals), between the labia and their anus, or on their thighs. Once the bumps open you might experience a painful or burning sensation in the course of a bowel movement or when urinating.

Males are at higher risk of getting sores than women. Males will notice small, red bumps on their penis or scrotum. At first they may not even be noticed by the patient. But these bumps will open up within 1-2 days. 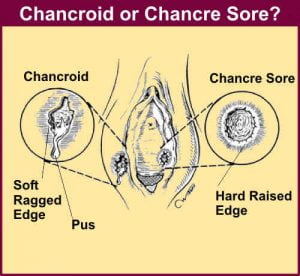 Symptoms that can occur in both females and men are:

How can you test for it?

You will need to go to your doctor, which will take samples of the fluid that comes from the sores. These samples will be examined in a laboratory for analysis. Testing via blood tests aren’t currently possible. But the doctor might decide to do several other tests to confirm diagnoses. Some of these tests includes examining the lymph nodes in your groin area for swelling and pain.

Your doctor might also order other STD tests to determine if you have any other sexually transmitted infections.

What treatment is available?

There are several basic ways to treat chancroid. They may vary depending on the severity of the infection. Should also state that there may be cases where the infection goes away on its own. But you should note that it may not happen earlier than in several months which may be inappropriate considering possible side effects such as scaring. Plus, if left untreated you might be at a higher risk of contracting another STD or STI.

If the infection is at the first stage of the disease, it can be simply be treated with the help of medication. The doctor will prescribe antibiotics that will need to be taken as prescribed on the script.

In some cases surgery may be the only way to remove infection by draining a large and painful abscess in the lymph nodes with a needle or through surgery. Though it still can result in slight scarring, it will help to prevent swelling and reduce the pain while healing sores.

What are the possible complications and preventive measures?

Chancroid can be cured easily, and if the medication is used correctly and the patient responds well to it, there will be no scaring. However, untreated chancroid can leave you will permanent scares. More so, it can lead to serious complication and infections in females.

Using condoms can lesson you chances of being infected. But as this is a skin contact transmitted disease, the person that is infected should have the responsibility to be treated before engaging in sex to avoid spreading this STD.