Insomnia Help with Sleep Music: Lullaby for My Favorite Insomniac by the Ahn Trio

Lullaby for My Favorite Insomniac by the Ahn Trio, from Sony BMG Music Entertainment, is everything the title implies and more.

If anyone could listen to these lulling sounds and fail to fall asleep, then they clearly need medical assistance with their sleep problem!

These lullabies are calming tunes which would also be very appropriate for relaxing, loving time or as background music for a romantic candlelight dinner. Vocals on the two cuts which are not instrumental only are performed very well by guest artists rather than the Ahn sisters. There are also some very nice guest whispers, mandolins, and voices and, as the liner says “noises” performed by others. These include the sound of a heartbeat and other calming sounds.

The core of the album, Lullaby for My Favorite Insomniac, however, is the music. It is lilting, soothing, calming, gentle, and the performance indicates a true love of music and people on the part of the Ahn Trio. The title comes from the title of one of the cuts on the album and the album lives up to its name.

I profoundly love Lullaby for My Favorite Insomniac by the Ahn Trio. First, I listened to the entire album in order to review the music. Then I placed it beside my bedroom stereo for sleepy-time listening.

The first night, I heard most of the 16 cuts on Lullaby for My Favorite Insomniac as I fell into a peaceful sleep. I only woke once during the entire night which is extremely unusual for me since I often wake every two hours or so. The next night, as I put the book I had been reading away, I again turned on the lullabies and fell into a deep sleep half way into the album. 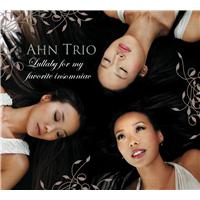 Going to sleep to the sounds of Lullaby for My Favorite Insomniac by the Ahn Trio has become my every night routine now and I truly appreciate that it is lulling me into a deeper, sounder sleep sooner and upon awakening, I feel more refreshed. For me, one of those insomniacs this body of work was written for, I am grateful for anything which helps me sleep well naturally, avoiding the need to use any of those potentially addicting, hang over producing, expensive prescription medications.

Who should own this album? Just about everyone including those seeking insomnia help. Anyone who has problems sleeping or relaxing clearly needs to enjoy these calming lullabies. If you have a friend who is about to have a child, it would make a perfect gift for a birth or baby shower gift since it would be perfect for soothing an unquiet baby or small child. The only time this album should NOT be played is when driving a vehicle or operating machinery. It is so very calming that it could easily cause an accident. If you feel tired, it also might not be right for playing at the office since it can be so soothing that you might fall asleep on the job and your boss would surely be upset with you. So, play it frequently in locations where you can safely relax and enjoy Lullaby for My Favorite Insomniac by the Ahn Trio.