Did you know that your gut serves as a second brain, replete with neurons that transmit information throughout your body? And that there are more immune cells in your gut than anywhere else in your body? Or that your gut is home to trillions of bacteria? This three-part series explores how the ideal population and balance of these bacteria form the very foundation for your physical and mental wellbeing.

Healing Leaky Gut Can Save Your Life: A case history

“I don’t know what’s wrong with me. I work out, eat right, have a good attitude about life, and I am a miserable wretch unfit for human company, what with the gas and all! Thank goodness my dogs don’t seem to know or care!”

This is diary entry written 6 years before the first anaphylactic reaction nearly claimed my patient’s life; before she had ever heard of Leaky Gut Syndrome.

In order to understand a gut-gone-wrong, it is helpful to know a thing or two about normal physiology. A healthy gut contains trillions of bacteria living harmoniously within. This normal flora, or population of healthy bacteria, nourishes the cells that line the intestinal wall and keeps them vigilant. This ensures that the gaps, or junctions, between the cells are kept fairly tight with only small openings to allow the transport of nutrients out of the gut and into general circulation. This is called assimilation, and it is the vital part of digestion that nourishes us on a cellular level.

When the beneficial bacterial population is disrupted due to poor diet, stress, medications, and toxins, for instance, the cells that line the intestines become weak and inefficient. Before long, the gaps or junctions between the cells open wider (get leaky) allowing large, undigested food particles and pathogens to move into the bloodstream. The body recognizes these large particles as “foreign,” and in a protective maneuver, launches an immune attack to destroy them. Many scientists and doctors now believe that a chronically leaky gut can set the stage for many autoimmune and degenerative diseases, including:

If you’re suffering from any condition on this list, or nearly any other health issue, you’d be wise to look to the gut as the probable place to begin your healing journey. Once your digestive system is working properly, you might be amazed to discover how many symptoms originated there. But why wait years until a disease manifests itself when there are so many warning signs and symptoms along the way, such as: 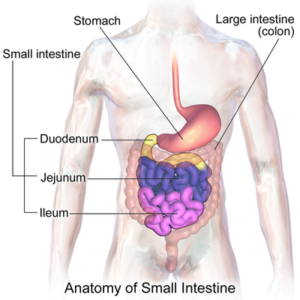 In addition to these overt signs and symptoms, leaky gut syndrome places an extra burden on the liver, making it hard to clear harmful chemicals from the body. This often results in a variety of food and environmental sensitivities, and that is exactly what happened to my patient.

Case History: A 47 year old female in relatively good health began to suffer from severe allergic reactions (4 occurrences within a 12 month time period) when exposed to various *triggers. Each episode began with itchy eyes that grew rapidly swollen accompanied by hives, chills and wheezing. This quickly advanced to swelling of the uvula and tongue, difficulty swallowing and breathing.

Note: This type of reaction is known as an anaphylaxis, and it can be life threatening without immediate treatment. My patient was lucky she had liquid Benadryl on hand as well as her grown son to administer a chiropractic adjustment (manipulating her mid-back calmed her sympathetic nervous system and allowed the respiratory passages to open).

Diagnosis: Leaky Gut Syndrome! Vitamin D is a hormone that helps regulate the gap junctions between the intestinal cells, and the patient’s Vitamin D levels fell at the low end of normal. Her leaky gut was allowing large food molecules into general circulation, and her body was using an overactive immune response to attack them. This created a heavy burden on her liver causing multiple food and environmental sensitivities. Essentially, she was an engine primed and ready to fire! In this constant state of inflammation or “general alarm,” even the slightest irritant could set off a potentially deadly allergic reaction.

Treatment: The patient was prescribed an epipen for emergencies which, despite possible side effects, is known to halt this type of reaction in its tracks. She committed to never leaving home without it. She was given Vitamin D drops to raise her level and a probiotic supplement to repopulate her gut with beneficial bacteria. She was advised to put a teaspoon of powdered glutamine into a glass of water each morning to help heal the gut lining. Lastly, she was instructed to remove gluten from her diet since eating wheat-containing foods consistently led to bloating and gas for her.

Outcome/Prognosis: The patient immediately began taking the Vitamin D, probiotics, and glutamine powder daily. She also adopted a gluten-free diet. After 8 months on the protocol, she lost 10 unwanted pounds, and had no further anaphylactic reactions. She continues to have her Vitamin D levels checked every 6 months and is optimistic her epipen will never see the light of day!

This case history demonstrates just one of the ways that leaky gut can substantially harm your health. It is now known that leaky gut syndrome is at the root of many common diseases, including autoimmune disorders that were previously considered to be of unknown origin. It is imperative that leaky gut be identified and treated in order to heal and prevent many of the serious maladies people are facing today.

Watch out for Part II of Your Gut is the Key to Your Health so you can learn about The 4 R’s program to heal your gut and the Top 10 reasons to take probiotics. You won’t want to miss it!