The Gift – A beautiful woman once came to two hunters from a holy place.

She was a Wakan Woman, a holy woman.

The man who had terrible thoughts about what he would do to the woman was quickly punished.

The other was told to return to the village and make a place for her. She returned with a Sacred bundle and The
Gift of the Sacred Pipe 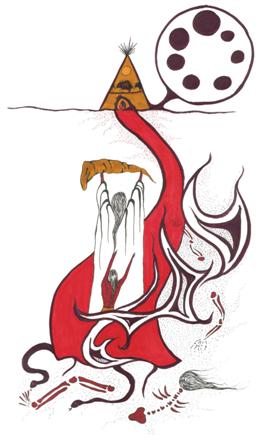 and the Seven Sacred Rites of the Pipe were given to The People. She is the White Buffalo
Calf Woman and her wisdom is the wisdom of The Creator.

Message from the artist: – “I have been walking The Red Road for nearly 10 years but still have much to learn.
Being an artist is not something I do, it’s what I am, and I’m very proud of that. It is my sincere wish that my
work touches something deep inside, touches the place where your soul smiles. Aho! Mitakuye Oyasin, Colleen Gray

A Little History on The White Buffalo Women

In Lakota Mythology, “The Seven Sacred Rituals,” where given to the Lakota by the White Buffalo Calf Women.

This
beautiful women was of the supernatural origin and was gifted special powers. When she lived among the Lakota,
she taught the them many sacred rituals and gave them a sacred pipe called the chununpa. This is one of the holiest
of all of their worship symbols along with the white buffalo.

The actual birth of a White Buffalo is very rare, and very few exisit today. When one is born, many flock to visit
it. To the Native Americans the birth of this rare animal is spiritiually significant, and said to be a sacred sign.

This story excerpted from Moon Lodge Visions: An Acceleration Handbook