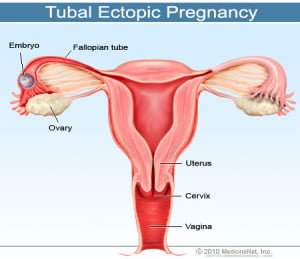 Most women tend to feel that inner joy when told they are pregnant. Unfortunately, pregnancy can go with its own complications. One of the complications that is quite rare is referred to as an ectopic pregnancy. You might wonder what that word stands for. With the few paragraphs below you will get a better picture of what ectopic pregnancy is.

For a woman to get pregnant her ovaries have to produce an egg first. Then the egg will have to travel from the ovaries to the uterus passing through the fallopian tube. It is in the uterus that the egg is supposed to meet the sperm. After copulation, the sperm is also released into the uterus and fertilization occur. The egg and the sperm become one, the new baby’s first cell has been created.

For some weird reason, sometimes the egg produced from the ovaries is not able to travel to the uterus and gets stuck inside the fallopian tube. If copulation takes place, the sperm may still be able to move through the uterus and go meet the egg that is still in the fallopian tube. Fertilization is not supposed to occur in the fallopian tube but because the egg is stuck there, the fusion of the sperm and egg may take place in an area of the woman’s genital organ where it was not mean to be. That is what doctors refer to as ectopic pregnancy. As the fetus grows it may start causing bleeding and pain to the woman having that condition.

Usually within the first few weeks after fertilization the ectopic pregnancy can occur but it may take 2 months for the doctors to discover it. It is a quite scary form of pregnancy because the chances of the baby surviving are very low but also the life of the potential mother is at risk. This condition affects 1 over 50 pregnancies.

Symptoms that may indicate you have an ectopic pregnancy
If you experience any form of vaginal bleeding it is important to visit the hospital to find out what is going on. Aside that the fetus can grow to the point where the fallopian tube rupture, at that point the pain is unbearable and the woman may even faint. Pain on the side of the body can also account for it. A good advice is to have a pregnancy test if you happen to have had unprotected sex. 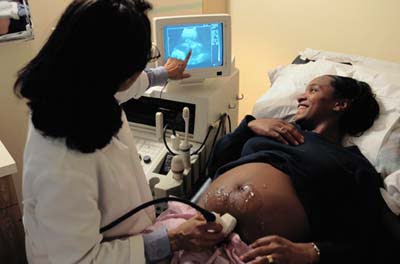 Why some women have ectopic pregnancies
Women with a defective fallopian tube are at a higher risk to getting an ectopic pregnancy but there are other possible causes too. For example a woman relying on an intrauterine device to avoid conception is also at higher risk. Some women may go as far as asking for a surgeon to operate surgical sterilization on them. Sometimes, without the knowledge of the doctor, things go wrong and the tubal ligation is not successful. Sexually transmitted diseases can also affect the health of the tubes.

How is this condition treated
In the worse scenario, the doctor will have to do a surgery and remove the damaged fallopian tube and uterus. That only happen when the tube has ruptured because the growth of the fetus has reached advanced stages. If the case is not that serious or the doctor was able to detect the condition early enough he might just do a small laparoscopic surgery or better yet the woman will only be given some drugs that she can rely on to end the growth of the fetus.

Nonetheless even in the scenario where the doctors will have to completely remove the affected fallopian tube, the woman can still conceive with the other tube. So there is still a chance.