In his documentary “Understanding MMS: Conversations with Jim Humble,” Adam Abraham explores the substance chlorine dioxide and its use as a healing protocol.

You will learn about this important discovery that very well could change many people’s lives.

By watching the film you will come to understand why Abraham had to make this film.

“The idea of producing a documentary germinated in November 2007, as I witnessed the growth in interest in MMS, the growth of success or succeeding stories from people who had begun using the protocol for a wide variety of conditions, and the dearth of additional information about what chlorine dioxide is, and how to use it for this particular application.”

The Chlorine Dioxide Approach to Detoxification

From the most basic of vaccinations and prescription medications to serious cancer treatments like radiation or chemotherapy, the American medical industry appears focused on treating specific symptoms of illness and disease through harsh methods that oftentimes carry dangerous side effects. This approach seems contradictory to the concept of wellness.

I have asked myself countless times, “Isn’t there a healthier way to protect and heal ourselves? Why just treat symptoms, why not treat the underlying causes?”

From watching “Understanding MMS,” I have learned that chlorine dioxide may be part or even a vast majority of the answer. Instead of adding further harm to the body, the mineral works to detoxify through the process of oxidation. It could very well be one of the most inexpensive, potent and effective anti-viral, anti-fungal, anti-bacterial agent that helps the immune system restore physical health.

Within the oxidation process the mineral destroys the acidic toxins and detrimental bacteria lurking within ourselves, while leaving the beneficial alkaline molecules in tact.

Chlorine dioxide acts as a cleansing mechanism, removing stagnant particles so that the body has the energy to heal itself. As Abraham explains, MMS (also known as the Miracle Mineral Supplement) really is not a miracle, but supports our body’s ability to heal given a chance.

Through his documentary on this mineral, Abraham talks with Jim Humble, the founder of the MMS theory, as well as Dr. John Humiston, an American trained medical doctor. Jim Humble’s more lengthy conversational dialog and teachings are balanced with Dr. Humiston’s clear and concise theories and experience.

Abraham also meets with a variety of people who have used chlorine dioxide to make significant changes to their health.

The Two Main Players on the MMS DVD

Upon first seeing Jim Humble, viewers take note of his great spirit. One thing remains clear throughout the DVD; Humble truly believes in the power of MMS, and sincerely wants to help as many people as possible.

He clearly describes the science behind the mineral therapy, leaving viewers nodding their heads in agreement. Though called a “miracle,” chlorine dioxide makes perfect scientific sense. It is a wonder that we have not attempted to use it as a physical detoxifying element sooner. 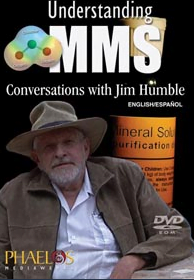 Humiston reiterates the medical reasoning behind the effectiveness of MMS. He uses the mineral personally and professionally, working with it to help himself, his family, and patients. Like Humble, Humiston has a great sense of humor which makes the documentary even more enjoyable. His thorough explanations provide further clarification on the safety and uses of MMS.

Through all of the information on the mineral, both Humble and Humiston note that chlorine dioxide is just becoming on the stage due to its far reaching effects. However they return to the science time and time again to explain its oxidation process, and how the potential affects within the human body. They both site examples of times in which the MMS worked effectively, and Abraham talks to real people who explain their unique health conditions, and the way the detoxifying solution worked for them.

At the end of the DVD, viewers should feel quite comfortable that they have a foundation for beginning to comprehend the potential uses and the understanding of MMS. Abraham does a fantastic job of “Understanding MMS” in both an educational and entertaining manner.

You will learn alot just by watching this seven minute trailer.