To Live Long, Exercise Rather Than Lose Weight

The secret to living a longer life has been sought by humanity for as long as we have roamed the earth. Dan Buettner found 5 “Blue Zones” across the world where people regularly lived to old age. Among Buettner’s findings were that people in those Blue Zones lived lifestyles that integrated physical activity into their daily lives. Researchers have highlighted the importance of physical activity in a study comparing the effects of physical exercise versus a weight-loss program. This study is the subject of an interesting article in Yahoo! Life. 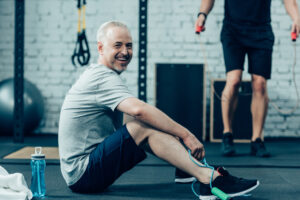 The study, “Obesity treatment: Weight loss versus increasing fitness and physical activity for reducing health risks” by Glenn A. Gaesser and Siddhartha S. Angadi reviewed over 200 studies of weight loss and physical exercise in both men and women. They found that the obese typically reduce their chance of heart disease and premature death much more effectively through physical exercise than by reducing their weight or dieting. Typically, because obesity has negative outcomes for health, people assume that the natural response is to lose weight. What the evidence suggests is that rather than trying to lose weight, a person should try and gain fitness. This is true, not just for obese or overweight people, but for all people.

The study also suggests that weight is not the barrier to being healthy that we normally think it is. The important thing is to have the right amount of exercise. Indeed, physical exercise does not do much to reduce weight. To lose weight, a person has to reduce their food intake. Exercise will not help you lose weight. Exercise just does not burn enough calories to help in reducing weight. Many people who exercise will know from that feeling of being famished after exercise, that your appetite can be stimulated by exercise, rather than reduced.

Glasser has spent decades studying the effects of physical exercise on body composition and metabolism, as well as on endurance, focusing especially on the obese. His research has shown just how futile an exercise regime is to weight-loss goals. They explain the frustration of those who have been dedicated to going to the gym and given up, feeling that something about their bodies prevents them from losing weight. That “something” is universal. A 2015 experiment showed that it is possible to gain weight while exercising.

Other experiments have shown that the overweight and obese, even those with health problems such as high blood pressure, insulin resistance, and poor cholesterol profiles, experienced a great deal of improvement in those conditions when they started exercising, regardless of whether or not they actually lost any weight. It is those studies that made Gaesser wonder what the research as a whole said about the link between physical exercise and metabolic health in the obese.

Gaesser’s study arrives at very decisive conclusions: a person is far more likely to experience health benefits from improving their fitness than from reducing their weight. So instead of punishing yourself with a harsh diet, go out and exercise and reward yourself: microblading eyebrows is the best gift you can give to yourself.