Goiters develop becuase of a thyroid misfunction, lack of iodine or chemical imbalance, or a because of a variety of diseases.

Dr. Leia discusses what exactly a goiter is, common causes, and diagnosis plans for people concerned that they might have a goiter.

Treatments for goiters are dependent on a doctor’s diagnosis, but natural remedies can be sought by a holistic practitioner knowledgable with the thyroid and its functions.

Non-Surgical Option for Treating a Goiter?

Question for Dr. Leia: I have a goiter on the left side of my neck, which seems to be getting larger. My question: Is there any way to shrink a goiter without undergoing surgery, which has been suggested? Other than the cosmetic part, I don’t seem to have any other symptoms. 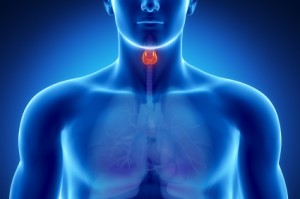 Dr. Leia’s Answer: Goiters are enlarged thyroid glands which may have many different underlying causes. Hopefully, your doctor has been searching for the cause of your goiter and has diagnosed it, or is in the process of diagnosing the type of goiter. Even though there are no other symptoms related with your goiter, there is usually an underlying hormonal imbalance or metabolic dysfunction occurring.

Symptoms of a goiter may include a feeling of tightness in the throat, swelling of the neck, which can be even or one-sided, difficulty swallowing, coughing, and maybe even difficulty breathing.

Most commonly, a goiter is formed because the thyroid gland is unable to produce enough thyroid hormone, so the gland enlarges. But an overproduction of hormone can also cause a goiter. A lack of iodine in the soil in certain inland areas of the country and world will cause a goiter. Iodine is necessary for your thyroid gland to produce its thyroid hormones. Iodine has been universally added to salt in order to prevent this lack of iodine in the diet. Chemical drugs and medications, lack of enough iodine in your diet, and family history are other causes of goiters. It is important to pinpoint the cause of your goiter, first, before attempting treatment.

In addition to a lack of iodine, there are many reasons why the thyroid can’t produce or stops producing enough hormones or produces too much hormones.

Some of these reasons can include:

There are many different ways in which your doctor can diagnosis your goiter: thyroid scan, hormone level blood tests, antibody testing, and an ultrasound test. 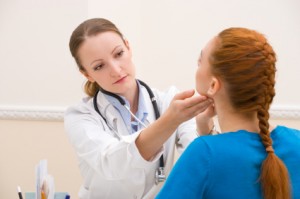 Treatment for goiters depends upon the cause and diagnosis. Not always will your doctor recommend surgery, especially if the goiter is smaller and not interfering with your normal activities. In your case, it is worrisome that your goiter is still growing, indicating that the cause has not been found. So make sure that your doctor has correctly diagnosed the cause, especially if it is a lack of iodine or too much thyroid hormones or a lack of hormones, or inflammatory reaction. These causes can be easily corrected by the proper supplementation and balancing of the hormone levels, or anti-inflammatory medications.

I am sorry that I cannot give you a simple natural remedy which will result in its shrinkage and disappearance, but after you have a better and more thorough diagnosis of your goiter, then maybe you could seek out a natural health practitioner who is knowledgable in thyroid problems. They can treat you with homeopathic remedies or Chinese medicine herbs along with acupuncture treatments. Good luck in your quest.