“Think like an athlete” – Part 1 – the right fitness mindset 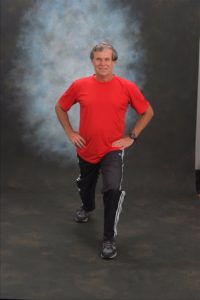 The beginning of any new career can be daunting. I left the corporate world at the age of 44 to start over in the fitness industry as a personal trainer. I made the decision because of Hans. He hired me the day after Labor Day in 1990. We met through his son and formed a bond that would last for the remainder of his life. I remember Hans because he gave me the courage to trust myself and also helped me establish a love for my work that would stay with me for the rest of my career.

Hans was in his 70’s and very much an unhappy man. He lived on Balboa Island – a small lovely community in Newport Beach where he had raised his lovely family. His two daughters and son loved him very much but he had grown distant and frustrated after the passing of his wife Marge.

Hans was obese and his general health condition was poor. He struggled to walk due to circulatory issues in his lower extremities. He had an enormous stomach that pulled his body forward and made moving difficult. He suffered from swollen and painful joints – and his feet were purple, indicating limited blood supply to his lower legs. He wore compression socks under regular socks.

I felt completely “out of my league” when we first met. He sat on a piano stool and I on a chair. I don’t remember much about our conversation because I felt so intimidated in his presence and yet there we were – eye to eye – trying to figure each other out. In spite of his many apparent challenges, I felt drawn to him and for some reason he felt drawn to me. We connected and I could feel my brain “clicking into gear” – attempting to design something for Hans that he could do without hurting himself. My first client! What on earth could I possibly do for him? My mind was racing as I left his house thinking about our first appointment. We decided I would come to work with him three times a week for an hour at a time.

Since it was obvious that he could no longer make any real gains physically, I devised a program for him that would include some heart work (he had a stationary bike in the house), some strength activity (he had some light dumbbells), and some relaxing massage work (not my forte). I knew that if I could engage him in being active again, I could find ways to encourage growth and change in him – even if it was very slow change. I instilled in him the idea that we are never done with life if we choose to engage it with all we have in our hearts and minds.

Hans had been an athlete at USC in the 30’s so I knew we could “tap” into that thinking again all these many years later. I knew in my heart that he needed to “reconnect” with himself and feel the joy of moving again.

I thought about the phrase “think like an athlete”.

For some reason that meant something to him too. We began with “baby steps”. I worked his weight training program in the seated position (which we continued for the rest of our time together). I had him ride his stationary bike for 5 and then 10 and finally 15 minutes a session – on very low intensity and then moderately higher over time.

I then finished by massaging his shoulders and back muscles while he relaxed in front of me on his piano stool. This proved to be his favorite time because he was warm and generally happy and most importantly he was opening up to me.

My “think like an athlete” message helped him “get up and move again”. He never complained or whined but instead told me stories of his past. I would sometimes have to miss our workouts if he was feeling ill or needed a break, but it never lasted more than a couple of days – until the end. I helped him live his final years in harmony with his family and friends – and sometimes even with a smile on his face.

His sister Gretchen, who lived in an apartment over the garage, would often tell me how much my time with her brother meant to him – even though Hans had trouble showing it. She felt my presence calmed him and helped him feel good about himself again. Finally, in late 1977, he fell ill for what would turn to be the final time. He left a legacy behind him that touched not only his family and friends but me as well.

What I and you can learn from Hans

Hans lives in my memory because we came into each other’s lives at the very moment we needed each other most, so that we could both grow and expand our idea of what is important in life. He was my “client mentor”: he gave me the idea that what I did mattered, that I should believe in myself, and that I could indeed help anyone move beyond whatever limitations they believed they confronted. The lessons he taught me live within me and enabled me to trust myself – and my instincts – in the service of others.