The spiritual and medicinal benefits of an Ayahuasca ceremony

Have you ever wondered what it would be like to have an out-of-body experience? Or have you felt that in spite of having looked into several ways of achieving personal growth, you have hit a plateau? Or perhaps you have been trying for years to come to terms with a traumatic experience, but your emotional healing has not been as successful as you had hoped. These are some of the reasons why Ayahuasca ceremonies have enjoyed increasing popularity over the last few decades, even though they have been used for centuries amongst Amazonian tribes as part of shamanic healing rituals. But what exactly is Ayahuasca? Is there any scientific evidence in support of the spiritual, psychological and medicinal benefits of this natural remedy? Can participating to an Ayahuasca ceremony benefit human beings in the 21st century, and if so, how?

What exactly is Ayahuasca? 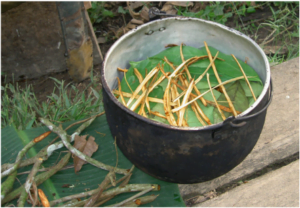 Ayahuasca is a decoction obtained by macerating some parts of the Banisteropsis caapi vine, which must be thoroughly cleaned using wooded utensils. Then the vine is generally boiled with the leaves of another plant, Psychotria viridian, although the leaves of other plants are also used. The ritual starts much before the actual performance of the ceremony, right from its preparation: the lower leaves of the Psychotria viridian should be picked by the user at sunrise after which a prayer should be uttered.

These plants are far from being randomly chosen. The Banisteropsis caapi vine contains strong chemicals which act as inhibitors of monoamine oxidase enzymes (MAOIs) and have successfully been used in traditional medicine to mitigate the symptoms of both Depression and Parkinson’s disease. Psychotria viridian leaves contain dimethyltryptamine (DMT), a psychedelic compound which is similar to serotonin in structure. The properties of MAOIs interact with the DMT making it orally active, thus conferring to the decoction its medical properties and psychedelic effects.

The scientific evidence in support of the benefits of Ayahuasca

A recent paper (Frecska, Bokor and Winkelman, 2016) unbiasedly reviewed the therapeutic potentials of Ayahuasca indicating that there is increasingly more evidence in support of the mental, physical and spiritual benefits of this decoction. Let’s consider some.

Among the medical properties of Ayahuasca, its purgative effects are renowned for succeeding in ridding the body of tropical parasites, which are first killed and then expelled thanks to vomiting and diarrhoea. Since it has been estimated that about 85% of Americans have parasites, this practice would also be beneficial to populations other than the ones exposed to tropical parasites. Ayahuasca also affects the cardiovascular system resulting in increased heart rate and blood pressure, and therefore might not be suitable for people at risk of heart disease.

However, Ayahuasca is most sought after for its psychedelic effects: the visual and auditory stimulation induced by the interaction of its two ingredients can result in hallucinations, visions, dream-like states of consciousness, near-death and out-of-body experiences just to mention a few. As reported by the majority of the people who have participated in an Ayahuasca ceremony, these experiences lead to a heightened state of consciousness and often culminate with insightful discoveries about one’s mental, emotional or spiritual issues. Many people also report a highly integrated brain state which allows them to see the bigger picture. The end result is emotional healing after the revisitation of unpleasant events during the ceremony. Last but not least, Ayahuasca has been successfully used for the treatment of both substance dependance and chronic low grade inflammation.

Getting ready for the ceremony

Whether you choose to do your Ayahuasca retreat in Peru or anywhere else, you should take the following precautions: