The Living Matrix: A Film on the New Science of Healing

The Living Matrix is a documentary film that premiered in London on March 13th.

The official premier was May 18th and 19th at The Lark Theater in Marin County, California.

This daring documentary was produced by Harry Massey and directed by Greg Becker. Massey is the founder of Nutri-Energetics Systems and Becker is president of an award winning San Francisco based film, video, and digital media production company, Emaginate.

This film challenges conventional medicine to expand its understanding of human biology by diving into a journey led by the world’s most respected experts in bioenergetics medicine. This journey takes the viewer deep into the human body and research to teach the lay person how quantum biology impacts health. 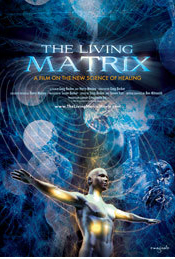 Real life stories of the sick and dying who recovered with bioenergetics medicine are told by the former patients themselves and through dramatic representations.

These are patients who conventional medicine had given up hope on and found life through the amazing, life saving principles of bioenergetics.

This groundbreaking film in not based on just patient interview and avid bioenergetics practitioners and believers, it ties together academic and independent researchers and scientists whose clinical research studies reveals bioenergetics to play as significant a role as biochemistry in human physiology and biology.

An Eye Opener for Western Medicine

Massey contends that Western medicine has yet to move outside its comfort zone to embrace these revolutionary findings, which can have profound implications not only for medicine, but for the pharmaceutical industry and other health-related areas.

This documentary is for anyone who wants to take control of their health and discover a new and better way to treat and prevent sickness and disease.

Americans Are Turning to Alternative Medicines

Lynne McTaggert shared in her book, “The Field” a wealth of scientific information supporting how consciousness can play an important part in healing and the power of our minds. More people in the Western world are opening their minds to holistic approaches to health and wellness.

A study by the National Center for Complementary and Alternative Health found an increase in Americans using alternative health techniques that incorporate information-medicine principles such as meditation, deep breathing, massage therapy and yoga. This increase over the last five years is the highest yet recorded.

With the side effects and dependency of pharmaceuticals and staggering costs of conventional healthcare it makes sense that more people are turning to alternative medicines, including those involving energy and information as explored in The Living Matrix.

The Living Matrix is an excellent film for a deeper look into quantum physics, energy fields, consciousness and how it applies to health and healing.

This film is sure to grab the attention of many Westerners and for good reason.