The importance of education for children

Education is one of those buzzwords that people like to use to sound socially progressive. They’ll often say that if the government spent more money on education all the problems of the economy would be solved. We are always hearing how more science and technology graduates will help us compete with countries like Japan and Germany and their hi-tech exports.

But when you think about it, this is really a view of education from a position of extreme privilege. In the UK, as well as int he majority of the developed world, universal basic education is guaranteed. So when we talk about “education”, it usually refers to ‘higher’ or ‘further’ education. Education is seen as a way to go from a comfortable life to being upper middle-class and above. “Education” to us means studying to be a doctor, lawyer or engineer. It means driving a nice car or living in a nice home filled with modern luxuries.

It’s fantastic that we are at the stage where we don’t worry about basic education and people can condescendingly refer to someone who has finished high school as “uneducated”, but in other parts of the world this is much more serious business. In many developing countries, education, even the simple ability to read and write, is aspirational and not something everyone can achieve.

It’s not just an issue of economics either. Many of these countries have cultural and religious objections to certain kinds of education. We often read about organisations like Boko Haram or the terrible shooting incident with educational activist Malala Yousafzai, who was shot as a teenage girl for simply voicing support for female education rights.

To people in these places education is not about wanting more than a middle-class life. It’s about having the knowledge and ability to uplift themselves to the point where daily survival is not the overriding consideration in their lives. It’s a more effective way to bring about civilised and just regimes in parts of the world where those in power would prefer to keep their citizens uneducated and intellectually vulnerable.

The first post-Apartheid president of South Africa, Nelson Mandela, put it into words perfectly in his book The Long Walk to Freedom:

“Education is the great engine of personal development. It is through education that the daughter of a peasant can become a doctor, that the son of a mineworker can become the head of the mine, that a child of farmworkers can become the president of a great nation. It is what we make out of what we have, not what we are given, that separates one person from another.”

It’s because of this dire need, that two years ago, I decided to sponsor a little girl’s education in Ghana, through Plan UK (http://www.plan-uk.org/).

Ghana is a nation that has a lot of promise, but still represents a less than ideal environment for women and has long way to go economically. It is a nation with cultural practices that are problematic to ideals of gender equality. In Ghana, underage girls are still forced into marriage. Female genital mutilation is tragically still a fact of life and the idea of even the most basic education for women is an idea not taken seriously enough if at all.

I feel that helping someone attain an education is the best use of my donation, more so than directly donating food or other supplies that will eventually be gone and have achieved little lasting change. Not that those donations are not very important, but we should also look at helping our brothers and sisters in these nations become self-sufficient. Unlike a truck full of food, an education is not something you can take away from someone once they have it and it is something they can give to others in infinite supply. Sharing knowledge means having more of it, not smaller shares of it. 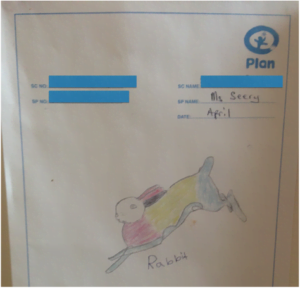 Plan UK has done a wonderful job of ensuring that I get regular updates about what the child I am supporting has been doing and where my donation has gone. I have had the privilege of seeing the little girl blossom over these past two years by way of her letters and photographs organised by volunteers of Plan. I have also had the pleasure of receiving a number of drawings from her, which I treasure. They take pride of place in my home and office.

Recently, I was given the opportunity to donate paper, books and coloured pencils to her school, something which they need desperately. And because even the most basic school supplies are far and few between, this was a big event in the community, and many of the parents of the pupils came to witness the occasion of the moment the resources arrived. Once again, a volunteer was kind enough to send me a photograph of the day they received the parcel and the delight on the children’s faces will stay with me forever.

Being a Plan UK sponsor has been one of the most rewarding experiences of my life and it feels great to know that I might have helped in some small way to break the cycle of poverty in a part of the world that desperately needs it. In my letters, I always encourage her to share with me her hopes and dreams for her future. She told me it takes her more than 40 minutes to walk to the school, and then another 40 minutes to walk home, but always comments on her school life with such positivity, and it’s clear how much she enjoys it. Over the past two years, her favourite things to do at school have ranged from reading, spelling and singing, and more recently, she shared with me that her current favourite subjects are maths and drawing.

In 2017, I am planning a trip to Ghana to finally meet her and her family – I am hoping for the trip to coincide with her 11th birthday.