The drug Kybella to zap away your double chin

Kybella is an approved FDA drug that works by destroying the fat cells under the chin and along the jawline. It destroys the fat by breaking it down and then adsorption of the fat cells. The active ingredient in Kybella, deoxycholic acid is a synthetic version of the salt found in human bile that aids fat digestion. In the digestive tract, deoxycholic acid breaks down fat by destroying the cell membrane. When it is injected into the chin it does the same action.

Results are than this drug can be used to contour and remove the dreaded double chin. It is also an alternative to liposuction surgery.

Who is it for?

If you want to improve your appearance and profile, by reducing the appearance of moderate to severe fat below your chin, then this is an option for you to explore. In the process you could get rid of your double chin.

An ideal candidate for this sort of procedure are:

The effects and safety of Kybella outside the submental area, meaning area where the fat pocket is underneath your chin, or in children below the age of 18 are unknown. But what is known is that if you have any infection in the area to be treated you should avoid this injection.

What you should be doing is inform your person that will be doing the procedure about all the cosmetic procedures that you had done, as well as all the medication you are using. The medication list should include not only the prescription medication, but also all the over-the-counter medicines, vitamins, and herbal supplements you are taking. The reason is some medications might lead to blood clotting.

If you are pregnant or breast feeding, you should best not make use of this treatment. That is since the implications of Kybella on the unborn baby is unknown. As well as if the drug is passed into your breast milk.

What procedure is used?

This drug dissolves the fat cells through a series of injections. There’s very little downtime, it’s noninvasive and nonsurgical, and there’s little risk.

The drug is injected into the fat. The dissolved fat is now cellular debris, and gets cleared into the lymphatic and circulatory systems by specialized immunologic cells. This happens gradually over the span of several weeks. As for the deoxycholic acid, it follows the same path; it gets metabolized and broken down, and then excreted as waste.The digestive tract, deoxycholic acid breaks down fat by destroying the cell membrane.

Your doctor might inject around 20 or injections per treatment under your chin. To do that correctly, they will apply a temporary tattoo dot grid on the area. This is sort of a map of injection sites. You will start to feel a burning sensation as the drug takes effect. This process of injecting around 3 vials of blood will take around 5 minutes.

You will need to do two to six treatments, roughly about six weeks apart.

For each treatment, the injector uses between one and three vials of Kybella, depending on how much submental fat one has. A patients will need a series of 12-20 injections per visit. You may need two to three total visits, spaced a month apart. Each treatment takes about 15 minutes. But some people may get up to 50 injections in a single treatment, with up to six single treatments no less than a month apart. 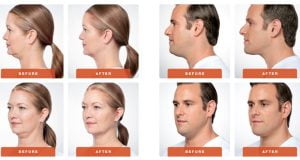 What are the risks?

Kybella does have some possible side effects. These side effects can include nerve damage. The nerve in the jaw can be harmed and it can result in an uneven smile or possibility of a facial muscle weakness. Other problems relating a nerve damage can be problems swallowing.

About 4 percent of subjects in one study had nerve damage in the lower jaw. This likely happens when shots are given too close to this nerve. But the damage typically wears off after a few months.

Stil the most common problems of Kybella are bruising, pain, swelling, numbness, redness, as well as areas becoming hard after treatment. Swelling typically peaks at 24 hours post-treatment and can last from two days to three weeks. The swelling is caused by the active medication breaking down the fat cells, and some of the volume can be attributed to the solution itself. Which means that the medication is working to dissolve fat. Areas of hardness (which can feel lumpy, or like small pea-like nodules, caused by swelling) in the treatment area. All of these, should be temporary.

The process can be relatively slow, with results taking weeks or more often, months. This can be discouraging, especially to people who are self-conscious about their chins to begin with. The good news is that once your months-long process is completed, those fat cells are not coming back. There is no upkeep to consider, or future costs. And the results can remain for about 5 years in around 75 and 90 percent of patients.