How can you grow and develop healthily? According to Martin Seligman, an American psychologist who has devoted his career to cracking the code of permanent happiness, being happy is more than the absence of misery. In his book Flourish – A visionary new understanding of happiness and wellbeing, Seligman identifies the 5 building blocks to flourish, which are contained in the acronym PERMA explained below. The assumption is that each of these 5 elements can be measured independently and must be pursued for its own sake, not in an attempt to achieve any of the other elements.

The 5 building blocks to PERMAnent flourishing

P – Positive Emotion: in other words, happiness. The interesting news is that the ability to experience happiness is 50% heritable, and what you have inherited can only be increased by 10-15%. Research has shown that flourishing people have a high ration of positive to negative emotions, the so called Losada ratio. For example, this ratio is 2.9 to 1 for a flourishing business and 5 to 1 for a flourishing marriage. But how do you get a high ratio of positive emotions? Sometimes, it’s sufficient to stop and think about the good things we have in life or in the evening one could reflect upon the things that have gone well during the day. This can redress the balance between positive and negative emotions. In other cases, some therapy might be needed to help people have a more positive outlook on life.

E – Engagement: the ability to be completely absorbed and fully involved in an activity or task and to derive enjoyment from it. When time stops while doing a task, an individual experiences what has been referred to as a flow state when his higher strengths are matched to the challenges of the task. So it’s important to identify one’s strengths and to do tasks which actively engage them. This might require one to re-craft a task or a job in such a way that it allows for the expression of one’s strengths. Research has shown that when people do their best in a task, after 6 months they still show less depression and less anxiety and report more life satisfaction.

R – Relationships: the ability to form social connections and establish intimacy with friends, family and a potential partner. The truth is that happiness is rarely solitary, while positive states are more easily experienced in the company of others. But how do we establish quality relationships? Research has shown that the way in which we communicate with other people has an impact on the quality of the relationships we form. The aim should be to make constructive and active comments when interacting with others. A constructive comment is positive in nature and seeks to increase the speaker’s understanding of his own actions, maybe focusing on something they had not thought before. An active comment directly engages with what has been said indicating that one is listening. An example is provided int he table below. This way of interacting will show that we care for them and will lead to loving relationships. 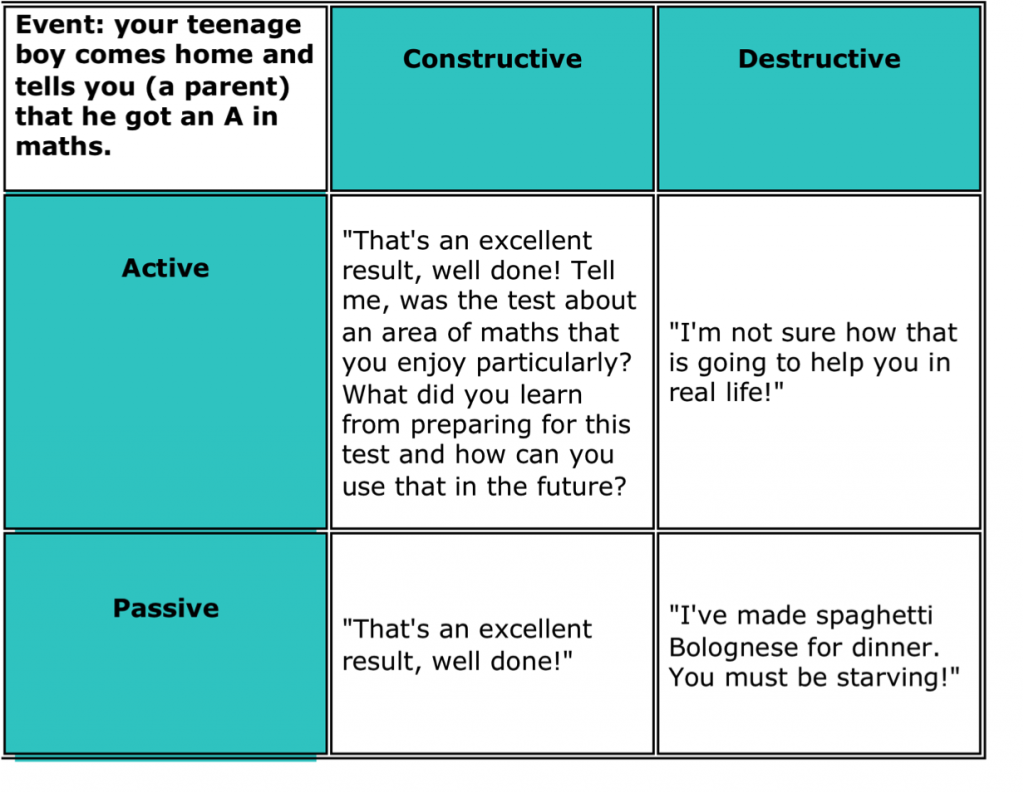 M – Meaning/Purpose: a sense of belonging to and serving something bigger than the self. In an experiment, students were asked to do something fun and something philanthropic, and then report back on their experience. The results showed that when the students did something fun the enjoyment was short lived: it only lasted as long as they were doing it. On the other hand, when students did something philanthropic, they had long-lasting benefits. Participants reported being mellow, feeling like listening to people and feeling that people liked them more. Another participant was happier helping people than doing shopping.

A – Achievement/Accomplishment: the pursuit of mastery should not be related to achieving positive emotion, meaning/purpose or relationships. A study showed that self-discipline is twice as good a predictor of academic success as was IQ, so with the right frame of mind we can all become accomplished.

Now that the code to happiness has been cracked and you have been given the 5 pillars upon which your happiness rests, it is up to you to start building upon them!

If you found this article interesting, I’d like to hear from you!