Why you should add spices to your food 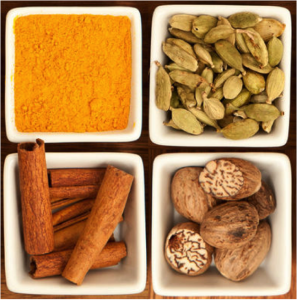 Can you recognize the spices in this picture? Ground ginger (top left), Cardamom (top right), Cinnamon (bottom left) and Nutmeg (bottom right). Not only are they high in nutritional and vitamin content, but they also have several health benefits. The Apple & Apple Crumble recipe published elsewhere on this site is just one example of how you can incorporate these spices in your diet. Let’s look at each of them individually.

Ginger is an ancient food and spice that is still used worldwide as a medicinal aid. An example of ginger’s long-standing use in the history of food is that it was initially used to make tonics, which have evolved into well-known drink beverages such as Ginger Ale. The dried root is used to make teas: its beneficial properties heal alleviate digestive problems. Some other benefits of ginger include: boosting bone health, aiding various digestive issues, support for menstrual disorders, aid in relieving motion sickness, nausea and the flu. Ginger is even known to enhance sexual activity. This root is a good source of vitamin C, magnesium, potassium, copper and manganese. It’s also low in saturated fat, cholesterol and sodium. Adding ginger to your diet as a dried spice it’s very easy, and the raw root can be incorporated into tasty dishes. Much in the same fashion as parmesan cheese, you can grate some ginger root onto your soup or pasta dishes.

Cardamom is rich in many nutrients, including: calcium, potassium, iron, pho-sphorus, magnesium, and traces of zinc and copper. The vitamin content includes vitamin C, and small amounts of thiamine, riboflavin, niacin and vitamin B6. In Ayurveda, this delightful spice is known to treat teeth and gum infections, digestive disorders, dysentery, constipation, lung congestion and throat problems. Even an antidote for venomous snake and scorpion bites can be made from it.

Cinnamon is loaded with nutritional properties and is also known for its health boosting effects. Just one teaspoon of ground cinnamon contains 28 mg of calcium, almost one mg of iron, over a gram of fiber, vitamin C, vitamin K, manganese, along with about 1/2 gram of healthy carbohydrate. 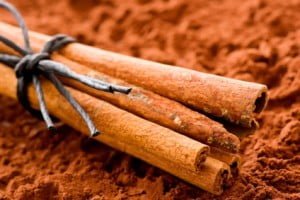 Those who are dealing with insulin resistance or Type II Diabetes do well by adding cinnamon to their diet as it helps control blood glucose level and improves insulin sensitivity. Because of these properties, cinnamon can help those who have weight management issues and brings about improvements in triglycerides, blood pressure and LDL cholesterol. Traditional medicine approaches include the use of cinnamon for digestive ailments such as gas, bloating, upset stomach and treatment for diarrhea. It also has synergistic properties. Research on the health benefits of cinnamon points towards its anti-inflammatory and anti-fungal properties, as well as its ability to enhance brain function. You can sprinkle some cinnamon on your hot drinks or add some to a fruit salad or bowl of cereals.

Nutmeg is another spice that has a worldwide appeal for its medicinal properties. The dried spice is added to dishes worldwide and incorporated into drinks, such as digestive teas aimed to help reduce acidity and decrease flatulence. It is known to help cure stomachaches and cramps. 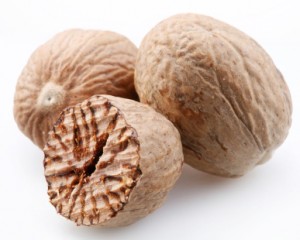 Nutmeg can help detoxify the body while regulating blood pressure and increasing blood circulation throughout the body. It is also used in some medicines to help with respiratory issues. In terms of its nutritional value, nutmeg is rich in potassium, calcium, phosphorus and magnesium. It also contains sodium, and a small amount of iron, zinc, copper, manganese and selenium. Nutmeg contains a good amount of vitamin A, vitamin C, and choline, with smaller amounts of thiamine, riboflavin, niacin, vitamin B6 and folate. Next time you cook some spinach, try adding some nutmeg just before serving your dish.

To ensure that you are using high quality spices and herbs is to buy them in bulk. The spices can be frozen and your spice jars refilled as needed. This is also economical and decreases the chances of running out of supplies. Whatever you are cooking, don’t forget to spice it up!