Can You Smoke Marijuana Leaves?

Anyone who has enjoyed the high that comes with smoking marijuana either asked themselves the question can you smoke marijuana leaves or has been asked the question. It might sound silly to experienced weed smokers, but the question isn’t that dumb.

After all, when you think about marijuana, the symbolic leaf immediately jumps to mind. So it’s only natural that curious folks would want to know if smoking marijuana leaves is a thing and if it can give you a high.

If you don’t know the answer, we’ve got you covered – we’ll discuss whether or not you can smoke weed leaves.

A Brief History Of The Marijuana Leaf

Cannabis has been around for thousands of years and can be traced back to ancient times. It has been documented as being used as medicine back in 2700 BC.

According to archaeological evidence, cannabis usage dates back to before the third millennium BC.

Proof of marijuana use for recreational and spiritual reasons has also been found in Africa, China, and India.

The plant in its entirety has always been admired for its many different uses. However, the leaf is often overlooked except when acting as weed’s ‘poster image’.

Cannabis leaves and buds have fundamental differences. They are: 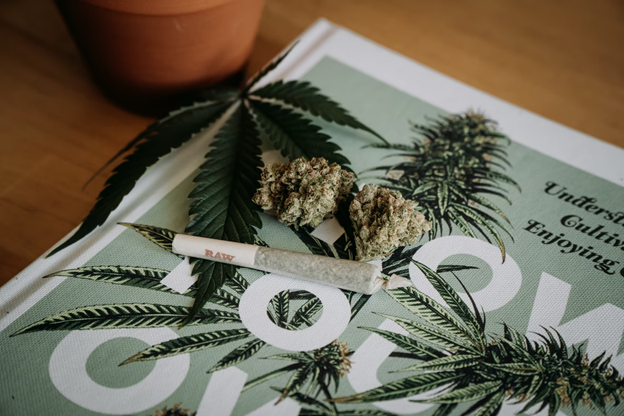 In general, cannabis leaves> small amounts of cannabinoids present, but not nearly as much as the buds.

The fan leaves of the male plant contain only trace amounts of cannabinoids, less than female plants have.

There are also small amounts of cannabinoids in the stems and sacs, which could be extracted to make hash and other oils.

Does Smoking Marijuana Leaves Get You High?

Smoking them wouldn’t be a great idea despite these small amounts of cannabinoids being present in the leaves.

Indeed, you can smoke them, but you won’t get the high you would when smoking the buds. Smoking the leaves isn’t worth the effort; there is only about 0% to 4% of THC and CBD to be found.

Because you need many leaves to get high, you will damage your lungs far more than you would when smoking buds.

Can You Vaporize Weed Leaves?

Vaporizing weed leaves is a much better idea than simply smoking them. This is because you’ll get a smoother and more potent vapor that will be able to bring out the cannabinoids in the leaves.

Also, when you vaporize cannabis leaves, you can alter the temperature to suit your taste and enhance your experience—low-temperature vaporizing results in more terpenes being released, which gives you flavorful vapor.

High temperature vaporizing will release more of the cannabinoids, so you have a better quality high.

You’re better off vaporizing the sugar leaves than the fan leaves because they contain more cannabinoids.

Cannabis leaves are helpful in many different ways, not only to give you an excellent high. So to make the most of your plant, use all of it to enhance your life.

You can make cannabis drinks from the leaves, and they’ll have the following benefits:

Although marijuana leaves symbolize weed, smoking them isn’t ideal. Instead, make tea from the leaves to improve your health and enjoy the high you get from the cannabis plant’s buds.