Prostate cancer and an enlarged prostate

Prostate cancer is an abnormal growth of cancerous cells that begins in a man’s prostate. This form of cancer is the second most common cancer in men in the United States, however the prognosis is normally good. This is due to the cancer developing at a slow rate and it is normally located to the prostate gland only.

The prostate is a small gland that contributes fluids to sperm to form semen. This gland is located just below the bladder. 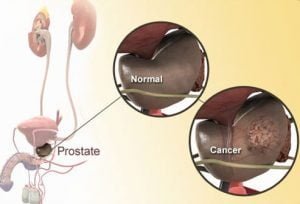 The symptoms of prostate cancer

The problem is that prostate cancer is usually asymptomatic. This means that there are few or no symptoms in the early stages. But since this gland wraps around the urethra and its proximity to the rectum, it can cause urinary, excretory, and sexual problems similar to a condition called benign prostatic hyperplasia.

The urinary problems that are frequently linked to prostate cancer will include symptoms such as:

Other symtoms that can be obversed, that do not related to urination are:

Who will be at risk?

Although the cause of prostate cancer is unknown, there are certain factors that can increase prostate cancer risk. These include genetics, use of drugs that reduce endogenous androgen (that is, hormones, such as testosterone) production, and the exposure to the chemicals cadmium, chlorine, and methyl bromide.

More so, men younger than 45 rarely have prostate cancer, but this cancer is more common in men older than 70. The risk factors include a diet high in red meat and high-fat dairy products and low in fruits and vegetables, being overweight, and having certain cell abnormalities.

Men fear the test of a prostate cancer more than the actual disease. That fear of a doctor doing a digital rectal exam on them, beings the fear of homosexual act to life. But even though this form of testing is an effective from of test, there are other tests that can be used such as a prostate-specific antigen blood test or a biopsy.

The treatment of prostate cancer is treated similar to other cancers with a combination of surgery, radiation therapy, hormone therapy, and, sometimes, chemotherapy. Still the newer treatments include immunotherapy and high-intensity focused ultrasounds.

An enlarged prostate, also called a prostate hyperplasia is a serious problem among men, particularly for men over the age of 60.

High testosterone levels are not a precursor to an enlarged prostate or cancer; rather, excessive DHT and estrogen levels formed as metabolites of testosterone are. Conventional medicine uses two classes of drugs to treat BPH, each having a number of serious side effects. These are:

Alpha-blockers, like Flomax, Hytrin, Cardura, and Rapaflo – These relax smooth muscles, including your bladder and prostate. They work to improve urine flow, but does nothing to reduce the size of an enlarged prostate.

5-alpha reductase inhibitors, such as drugs like Avodart and Proscar. The enzyme 5-alpha reductase converts testosterone to DHT, which stimulates the prostate. Although this class of drugs does limit the production of DHT and shrinks an enlarged prostate, it comes with a number of significant risks, including a higher chance of developing prostate cancer. 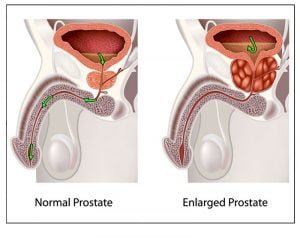 What are the problems associated with low levels of testosterone?

Some of the problems are weight gain, breast enlargement, as well as a weak stream when urinating.

What alternatives are available to conversational drugs?

There is also solid research indicating that if you take astaxanthin in combination with saw palmetto, you may experience significant synergistic benefits. As such, an optimal dose of saw palmetto and astaxanthin can then decreased both DHT and estrogen while simultaneously increasing testosterone. Also, in order to block the synthesis of excess estrogen (estradiol) from testosterone there are excellent foods and plant extracts that may help to block the enzyme known as aromatase which is responsible producing estrogen. Some of these include white button mushrooms, grape seed extract and nettles.