Prevention is the best cure: How to disrupt Alzheimer’s disease

The word Alzheimer’s brings disparate associations to mind for different people. For many, it is an abstract medical term read in a paper or heard on the radio that has something to do with memory or older people. Some have heard it with relation celebrities such a Charles Bronson, Ronald Regan or Glen Campbell who were or are currently affected by it. For others still, Alzheimer’s is much closer to home and yet estranging: neighbours, friends and family whose memory is being erased are no longer able to recognise them. Those who have been diagnosed are often unfamiliar with what Alzheimer’s will mean for them: it remains just a word, a diagnosis involving a prescription and some further tests. But what does a person affected by Alzheimer’s feel? What are the first signs of the disease? And how can it be prevented? This article looks at 3 dimensions of Alzheimer’s, or 3Ds: Description of the disease, to increase understanding of the experience of the people who are affected; Detection  of the disease with an emphasis on early recognition; and, Disruption of the disease, namely how to slow it’s course down.

The progression of Alzheimer’s inside the brain is often likened to a traffic jam clogging up motorways. As pathways for nerve signals become blocked and weakened, the adaptable nature of natural healing processes allows different pathways to take over from the usual routes, a kind of nervous system road diversion. This works for a time until the smaller size roads become congested and the “traffic” is diverted to increasingly smaller lane-ways, becoming further overloaded. Slowly but surely, the flow of traffic breaks down. So too does the progression of normal nerve signals which allows people to access memories. Normally, given things such as the recognition of friends and family, one’s sense of identity and awareness of one’s whereabouts become more difficult. The family is often as bewildered as the diagnosed member: they wonder how they failed to see the signs or feel guilty for ignoring them. So what are the early signs of Alzheimer’s disease? 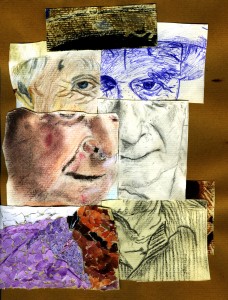 The first signs of Alzheimer’s are gentle indications of the disease. A forgotten phone number of a loved one or perhaps arriving at the door of a previous residence to suddenly realise “what am I doing here? I used to live here many years ago”. So gentle that people usually continue with daily life as normal, often embarrassed about doing something so “foolish” that they don’t tell anyone. This can go on for years until a relative, spouse or friend notices behavioural changes, such as being suddenly confused for no apparent reason. The amount of times this happens increases, then sometimes disappears only to worsen again. It’s an unrelenting process by which the person we know slowly seem to “dissolve” into another personality, a more irrational, unpredictable and unfortunately less familiar person. As we see our loved ones drift away from who they used to be, they struggle to recognise us too. Just like in the picture below, the self and the world become fragmented.

The truth, however, is that it is not quite a matter of “them” and “us”. In fact, we are all potentially susceptible to being affected by Alzheimer’s, with the number of those affected being ever-growing; it should be a reality for all of us. Older people are more likely to develop Alzheimer’s, rarely but sometimes signs are there in our 30’s and 40’s. In some people, the signs remain mild and natural ageing overtakes the symptoms, while in others there’s a rapid decline in cognitive abilities. As with all diseases, there is a spectrum, a spread of types and severities. However, its development is not just all down to chance.

“Prevention is the best cure”, is an expression we are all familiar with. However, this is particularly true of Alzheimer’s as there is as yet no proven cure despite the fact that medical professionals and researchers are working hard to make progress in this respect. Our best day-to-day chance is to work on the side of prevention. The reassuring news is that the choices we make during our life can make us more likely to develop Alzheimer’s and can also have an impact on how quickly it progresses. The preventive factors are so simple that they are more often than not overlooked. I’m sure you have heard it all before: a little exercise, good nutrition, hydration and a good mental diet. However, when you are well, it’s difficult to see how these factors are crucial to the prevention and delay of the development of Alzheimer’s.

1 Exercise: Walking just 20 minutes every day keeps our vascular system pumping and flowing. A car driven every day is more likely to have clear fuel lines than the one parked in a garage and driven once every Sunday. This is particularly helpful for what is termed multi-infarct and vascular type of Alzheimer’s, where blood flow blockages are a factor.

2 Nutrition: Eating fish, fresh vegetables, quality olive oils and grain based foods is recommended for a balanced diet which nourishes the brain and neurons, slowing down the process of degeneration. Regular meal times balance out the sugar levels during the day, thus reducing any elongated periods of low sugar. This means less stress for the body’s metabolism. Changing and topping up oil and petrol in a car keeps it running smoothly as the system is well fuelled.

3 Hydration: Drinking water and green tea regularly hydrates the body. Every cell in our body needs to keep a very precise salt and water balance, low hydration levels puts stress on cells and can alter the ways cells function and repair. This also potentially helps to slow down degeneration. We need water which act as a coolant to keep body’s temperature balanced and reduce the stress on the “engine”.

4 Stress: Whether from emotional, internal or external sources, stress puts our body into fight-or-flight mode. Adrenaline strongly affects blood flow, hormone and brain activity. Extended periods of stress interfere with the way our immune systems work and how the body regenerates and repairs. Consciously choosing a good ‘psychological diet’ helps to reduce stress. This can be as simple as choosing to meet positive people on a day we may not feel so positive ourselves, or saying ‘no’ to tasks that we know will not be good for our wellbeing. Watching and reading light comedic material instead of “dark”, “heavy”, media, films and books cause stress releasing hormones to be produced in our body and lowers blood pressure. It actually is “good” to laugh, for our minds and bodies.

5 Mental exercise: Activating our brain’s wires, or neurons, on a regular basis keeps them active and strengthens them. Doing crosswords, learning a new language, art, music and dance all play a part in speech, memory, co-ordination and creativity. These allow us to use rather than loose the functionality of the neurons thus keeping us sharper and more alert for longer in life.

Alzheimer’s is a reality of life that we might encounter directly or indirectly, either now or in the years to come. Not only is prevention easy, but it is also enjoyable, heathy and helps us to avoid other diseases too. A positive attitude towards preventing and living with Alzheimers can go a long way towards improving the quality of life and supporting those who need our help.

Martin Fitzgerald is specialised in Chinese Medicine and has been involved in the Disrupting Alzheimer’s Project in the capacity of holistic practitioner. The project, founded by Christopher Fleming, aims to provide support to Alzheimers’ patients and training for their carers, as well as informing the general public. You can support their work by downloading your own digital copy of their new song “What Can You Do” which has been released to create awareness about the increasing number of people being diagnosed with Alzheimer’s and to highlight the role that nutrition, holistic therapies, exercise and practical tasks play in helping to delay and disrupt the onset of this and other neurological diseases.