Can an Average Joe or Jane who prefers fast food to healthy home cooking get a beach body?

The answer to that question can be found by asking the creator of Power 90X who is known today as one of the leading fitness experts.

Tony Horton was a small town boy from Rhode Island who hated exercising and lived on fast food. A 98 pound weakling, his insecurities drove him to avoid sports. Yet he went on to achieve a beach body we all envy.

So how did Tony Horton go from a scrawny fast food junkie to a buff beach body? He got hooked by the acting bug and Hollywood called his name.

After graduating from the University of Rhode Island, Tony moved to Hollywood to pursue this dream. But his body and physical health was a road block to success. Long hours deprived him of the time necessary to achieve the body he wanted. Getting proper exercise and nutrition eluded him. But his talent agent made it clear. If Tony wanted to make it in showbiz, he needed to get fit.

Tony took a look around at the successful actors of Hollywood who had great bodies. Beautiful people were everywhere and one was award winning bodybuilder and actor Arnold Schwarzenegger. Tony joined the World Gym in Venice, California, where Arnold Schwarzenegger and fellow bodybuilder and actor Lou Ferrigno worked out. He took notes on their workout and nutrition programs. But Tony felt guys like Arnold were too big and bulky for his taste.

Tony was seeking a sleek, athletic look, much like the long and lean, fit stature of Barack Obama. 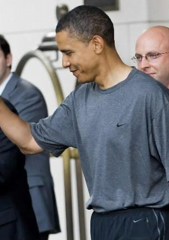 Obama goes to the gym every day to cross train. He even worked out the day after he was elected as President of the United States. We know from photos of Barack Obama’s trips to Hawaii that he has a pretty decent beach body. Like Tony Horton, he focuses on sports like basketball to stay in shape, and resistance training for a toned, lean body.

As he developed a fitness routine that would become Power 90X, Tony focused on exercises for speed, flexibility and balance. He studied and perfected his own version of cardiovascular and resistance training after studying world-class tri-athlete Mark Sission’s program of exhilaration drills and interval training.

Tony discovered his now fit body affected every area of his life. His mental clarity improved, and his renewed energy levels allowed him to be more productive. Tony’s possibilities opened up. He explored new activities including rock-climbing, inline skating, yoga, Pilates, and plyometrics training. His fitness program combined circuit, cross, and interval training, weight and resistance training, cardiovascular/aerobic training, advanced stretching, yoga, and kickboxing. These activities became the foundation for his ground breaking fitness systems including Power 90 and Power 90X.

Fitness Trainer to the Stars

Before Tony began laying the groundwork for his revolutionary Power 90 and P90X Workout, he became the premier fitness trainer to the stars. His own life changing experience with his unique combination of cross training did not go unnoticed. First friends and acquaintances were blown away by his physical transformation. Everyone asked “how did you do it?” It was obvious whatever Tony Horton was doing, he was doing right!

Musician Tom Petty of Tom Petty and the Heartbreakers took notice of Tony’s transformation. Tony trained Tom with his newly developed system, and helped Tom get in the best shape in his life. Soon Tom’s rock-n-roll friends were banging on Tony’s door and begging for his training expertise. This began Tony’s career as a sought after fitness trainer who’s beach body spoke for itself.

In the late 90’s, Tony was retained by the major Hollywood studio, Touchstone Pictures. He conditioned the entire cast of the motion picture, The 13th Warrior, including Antonio Banderas.

The elite of Hollywood got wind of Tony’s expertise and his clientele grew. Celebrities and recording artists who benefited from his guidance included Shirley MacLaine, Billy Idol, Sean Connery, Annie Lennox, and Rob Lowe. Tony’s conditioning skills combined with his unique motivational abilities were in high demand.

In 1996, Tony met Beach Body president, Carl Daikeler through a client. Tony and Carl hit it off, and became friends. Carl hired Tony to be his personal trainer, and after the first three months Carl was in absolute disbelief. In just 90 days, he saw remarkable changes in his body he never thought possible. Carl realized Tony had hit upon a training system that as truly revolutionary.

Beachbody was founded in 1998, and soon became the innovative creator of the most popular in-home fitness and weight loss solutions. Along with co-founder Jon Congdon, Carl Daikeler brought Tony Horton on board. Tony’s

expertise soon became available for everyone to take advantage of in their on home.

Tony’s first Beach Body product was a line of exercise videos called Great Body Guaranteed! It was soon followed by Power 90, Power Half Hour, Tony and the Kids!, Tony and the Folks!, Power 90X, 10 Minute Trainer, Tony Horton One On One, and for advanced fitness enthusiasts Power 90X Plus.

Tony is now the Guru for In-home fitness enthusiasts offering a complete line of fitness products marketed through Beach Body for those seeking rapid weight loss, muscle definition, fat loss, and lean bodies with Tony Horton fitness programs designed for people of all ages, shapes, and various levels of fitness.