Oxytocin: what role does it play in relationships?

What is oxytocin? You might have heard of oxytocin as the hormone that is released in the blood stream during childbirth and while breast-feeding to favour bonding between mother and child. Until the 1997, oxytocin was marketed in the US under the name of Syntocinon. It was used by women having difficulties breast-feeding their babies. However, oxytocin serves multiple purposes some of which are related to forming relationships with other people, and is released when we experience trust, romance and even orgasm. For example, oxytocin is known to cause spontaneous erection in male rats when injected into the cerebrospinal fluid. So how is oxytocin related to the formation and maintenance of intimate relationships? Researchers have used a simple scenario in which oxytocin is administered to monogamous or single men just before meeting an attractive woman and the physical distance between them was measured.

What did they find?

A study in which oxytocin was administered to monogamous men showed that these distanced themselves from a beautiful woman, a confederate, they had just met. The same scenario was used to test the effect of oxytocin on single heterosexual men: surprisingly, it didn’t seem to have the same impact. Instead of distancing themselves from the beautiful woman, single heterosexual men got closer and positioned themselves within a range of 21 to 24 inches from her. In comparison, the men who had declared to be in a “stable monogamous” relationship kept themselves 6.5 inches farther away from the beautiful woman.

To see whether oxytocin was really responsible for this difference, the researchers repeated the experiment using a placebo, meaning that no oxytocin was administered at all. With the placebo, single men and those in a relationship did not show any difference in terms of the distance between themselves and the beautiful woman they had just met. Even in experiments in which monogamous men were given a picture of a beautiful woman, those who had just received oxytocin distanced themselves from the portrayed woman by giving a significantly lower attractiveness score compared to single heterosexual men.

A similar experiment was carried out, but this time, instead of using a woman for the test, they used a man. It was found that monogamous men did not differ from single men in terms of the distance between themselves and the newly met man. 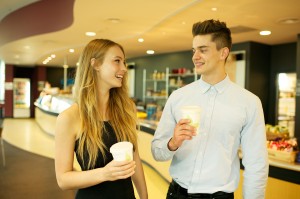 How can these results be interpreted?

Based on previous research which showed that by increasing the amount of oxytocin in the brain the behaviour of the person becomes much more friendly and trusting without any discrimination, researchers were expecting that a higher dose of oxytocin would draw a man closer to a woman, not farther away. Dr Rene Hurlemann, who led the studies reported above, admitted that the results were quite surprising. Dr Hurlemann added that this finding makes evolutionary sense. It seems that over time, oxytocin may have evolved to play a role in monogamy by promoting staying over straying behaviour to make sure men stick to the already found mate. Collectively, these studies suggests that oxytocin may act in a more subtle way than what was previously thought.

Paul Zak, the founding director of Claremont Graduate University’s Center for Neuroeconomics Studies, said that this finding confirmed what he had observed in his own research. The idea that oxytocin makes people much friendlier is actually not accurate. It rather makes them more empathetic in a way that attune their behavior to social cues and adjust accordingly. Scientists are still investigating the potential of oxytocin made drug as an aid to children with autism and schizophrenia to help improve their social skills and their empathy.