Nose surgery: The basic details, including the risks

What is nose surgery?

Rhinoplasty (corrective nose surgery), is also commonly called a nose job or nose reshaping. This cosmetic procedure involves repairing the nose after injury or improvement of the facial harmony and proportions of the nose to the rest of the face. A small change can have a large emotional effect on a post-rhinoplasty patient. With new levels of confidence in their physical appearance.

Who is a nose job for?

A nose job can treat:

This procedure is also prescribed for patients to correct a deviated septum. This is to assist people that are suffering with impaired breathing, due to structural defects in the nose. Nose surgery, that involves adjusting the nasal structure to produce better alignment, can then help to improve an obstructed airway by increasing airflow and breathing.

What is the procedure?

The operation itself is performed from inside the nose, thereby reducing the chances for scaring. Nasal contouring is done by removing, or moving the underlining bone and cartilage structure. Skin is then remoulded over the new foundation. But different skin types will have react differently. A thinner skin can easily drape over the new contour; whereas thicker skin is more difficult to control and will not adapt as easily to the new form.

While initial swelling subsides within a few weeks, it may take up to a year for your new nasal contour to fully refine. During this time you may notice gradual changes in the appearance of your nose as it refines to a more permanent outcome. 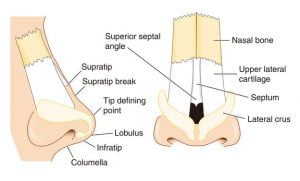 What is the risks?

Knowledge of relevant complications and sequelae are essential to enlighten the patient so that an informed decision can be made, for reducing the incidence of such complications, for minimizing the gravity of an impending complication, and for treating a complication once it has occurred.

Candidates that are in good health, does not smoke, and whose facial growth is complete, will reduce their risk factors for this procedure. A good plastic surgeon will however consult each patient on their own risk factors and complications, and well as realistic outcomes. However, the most common risks associated with a rhinoplasty include:

Biggest problem with this sort of cosmetic surgery is the patient’s expectation and the final results. Even though the final results can take up to a year, patients might disapprove of the outcome. Lack of consulting can be blamed, as the expectations should have been more realistic. For instance, patients should be informed that each person has a degree of asymmetry, a complete symmetric appearance will not look natural. Although it should be said that some asymmetry or contour irregularity can result from imperfect surgical judgment.

The nasal passages cannot be narrowed beyond a certain point, since some of the underlying framework must be preserved. There is a balance, leaving sufficient framework to permit normal breathing capacity while removing excess or distorted anatomical parts.

Beyond expectations, there can be errors some surgeons can make. The most common postoperative complaint concerns the presence of a small amount of surgical packing placed in the nose at the end of the operation. It provides some control of postoperative bleeding, and the longer such packing remains, the easier it will be to remove without disturbing any of the freshly healing tissues.

It will take time to adjust to your new look and recovery time can be extensive, with swelling prevalent for 2 weeks.