Neotame is a chemical substance created by chemists from Monsanto—now produced by NutraSweet—as an artificial food and drink sweetener or flavor enhancer.

Neotame is created using aspartame—a known neurotoxin—and adding 3-dimethylbutyl, a compound classified by the Environmental Protection Agency as hazardous. As with aspartame, neotame metabolizes formaldehyde and other nerve damaging toxins.

The Food and Drug Administration does not require food and drinks containing neotame as an ingredient to be labeled.

In 2002, the FDA approved neotame for general use as a sweetener. It is not available to consumers, but used by corporate food and drink producers as an additive in hundreds of prepared foods. Unlike its close comparison, aspartame, neotame is heat stable, allowing it to be added to many baked goods. Some common products that use neotame include: 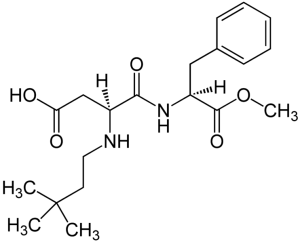 According to the neotame website, one teaspoon of this chemical equates to 8,000 teaspoons of sugar in sweetening power. The same sweet taste using less product is translated into an economic benefit for food and drink producers:

“As the price of raw materials continues to rise, neotame offers manufacturers a unique solution to lower their ingredient costs.”

Neurotoxins are chemicals that impair the functioning, development, and maturation of nervous tissue. They can be naturally occurring (such as certain algae) or man-made.

Aspartame has long been known as a dangerous food additive for its neurotoxic effects. And because neotame is largely comprised from aspartame, it too is a neurotoxin.

Neurotoxins have dramatic health effects, including but not limited to:

Lack of Labeling by the FDA 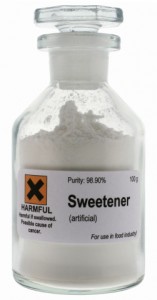 The FDA does not require the labeling of neotame in food and beverage products. Critics of this ruling argue that the FDA is pro-business and pro-corporate, therefore “helping” the big businesses earn money while overlooking negative health consequences to virtually the entire population. The FDA has also come under fire for its virtual lack of testing for the health safety of neotame.

The FDA does not require the listing of ingredients when they make up less than 1% of the product. When this is the case, “natural flavors” is used as an ingredient. What results from this is the fact that most people unintentionally consume neotame on a daily basis.

Is that really so bad? The 3-dimethylbutyl that is added to aspartame to create neotame is classified as a highly flammable irritant to the skin, eyes, and respiratory system. This is added to reduce the amount of phenylalanine that is created when digesting aspartame. People with the metabolic disorder Phenylketonuria are highly sensitive to this amino acid, yet the FDA does not require a PKU warning label on products that contain neotame.

How to Avoid Neotame in Your Diet

Because there are no labeling requirements for this neurotoxin, it’s difficult to know what products you purchase in the supermarket contain neotame. To avoid this chemical additive, you can do a few things:

For many people, due to location, resources, knowledge, or more, this may prove extremely difficult.