Molluscum contagiosum is a viral skin infection caused by molluscum contagiosum virus (MCV), a pox virus. The virus can be seen in groups or single water warts that are small, raised, pink lesions with a dimple in the center. These are normally sore and itchy. The areas normally affected at the legs, arms, abdomen, neck, and face. But as it can also be found in the genital areas it can be described as a sexual transmitted infection (STI).

Molluscum contagiosum is extremely contagious. The virus is spread either by direct contact including sexual activity or via contaminated objects like towels. The condition can also be spread to other areas of the body by the person themselves, and people can get reinfected. Risk factors include a weak immune system, atopic dermatitis, and crowded living conditions.

The incubation period is usually between 2-8 weeks. Then number of small, firm, raised papules (spots) on the skin with a characteristic small dimple in the middle will appear (see image). 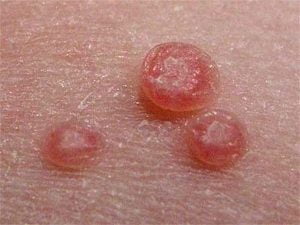 They aren’t painful, but can be itchy. They’re most often found in the armpit, behind the knees or on the groin. There may be tenderness, pruritus and eczema around the lesions.

Diagnosis is typically based on the appearance. Lesions are flesh-colored, dome-shaped, and pearly in appearance. They are often 1–5 mm in diameter, with a dimpled center. The diagnosis can be confirmed by excisional biopsy.

For mild cases, over-the-counter wart medicines, such as salicylic acid may shorten infection duration. Daily topical application of tretinoin cream may also trigger resolution. These treatments require several months for the infection to clear, and are often associated with intense inflammation and possibly discomfort.

Besides squeezing or piercing after a bath, there are surgical treatments that include cryosurgery, in which liquid nitrogen is used to freeze and destroy lesions, as well as scraping them off with a curette. Application of liquid nitrogen may cause burning or stinging at the treated site, which may persist for a few minutes after the treatment. With liquid nitrogen, a blister may form at the treatment site, but it will slough off in two to four weeks. Cryosurgery and curette scraping can be painful procedures and can result in residual scarring. If there is secondary bacterial infection, a topical antibiotic cream may be required. As 10% of the people will develop eczema an emollient or mild steroid cream may be helpful if there is surrounding eczema or inflammation

Once the virus-containing head of the lesion has been destroyed, the infection is gone. The central waxy core contains the virus.

Unlike herpes viruses, which can remain inactive in the body for months or years before reappearing, molluscum contagiosum does not remain in the body when the growths are gone from the skin and will not reappear on their own.

But you should avoid scratching, since it can lead to secondary infection and scarring. Eye problems can develop, as secondary eye infection may develop, such as conjunctivitis or keratitis, which may cause your eyes to become sore and sensitive to light.

People with HIV will experience worse symptoms than others.

Although molluscum contagiosum is highly infectious, the chance of passing it on to others during normal activities is not that great. It is therefore not necessary to stay away from work, school or taking your child out of the nursery, or to stop doing activities such as swimming if you have the infection.

You should however take some steps to avoid spreading the virus to other people. For example, you should:

If it is found on the genitals of a child, then sexual abuse should be suspected.