On January 27th, 2009 it was reported by Reuters that a study detected mercury in about one half of the samples they tested.

This study was published in the journal of Environmental health by Renee Dufault, who is a former Food and Drug Admin scientist.

She and her colleagues were the ones who found the mercury tainted corn syrup. Out of twenty samples tested, nine contained the toxic metal, mercury.

It is difficult to find packaged and bottled food when circling the isles of the common supermarket that do not contain corn syrup or high-fructose corn syrup. This is because corn is one of the largest crops produced in the US.

Corn crops are taking over the land of so many small farmers across the US. Recently, two young Yale graduates, Ian Cheney and Curt Ellis released a powerful story tracing the history of corn in modern America and how it does not resemble the corn of our past.

To learn more about genetic corn, and its invasive promotion check out this eye opening documentary, King Corn.

Concerns About Mercury in Corn Syrup

Since many common foods are made using high fructose corn syrup you may wonder how the syrup become contaminated? Is it in the corn, or is the mercury introduced in the processing?

Also of concern — when Dufault told the FDA of her findings they pretty much ignored the study and didn’t follow up. But, Dr. David Wallinga, a food safety researcher and activist heard of the study and decided to conduct his own.

He decided to test actual food. He went to the supermarket and attained fifty-five different foods that contained high amounts of high fructose corn syrup. Foods such as barbecue sauce, jam, chocolate syrup, and even yogurt.

Now here is the scary news:

Dr. David Wallinga’s study, found one out of three products contained mercury above the detection limit.

Debate by the Corn Refiners Association 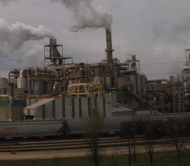 Next, the Corn Refiners Association challenged Wallinga’s findings on the opinion that the study was biased, and of a dubious nature.

Wallinga and his colleagues suspect that the mercury was introduced to the food during production at plants that used mercury-grade-caustic soda produced in chlorine plants, but remained unable to prove this hypothesis.

The Corn refiners Association reported back that their industry used both hydrochloric acid and caustic soda that were mercury-free (two substances in the study) and had been used for several years.

Although Willinga did not test foods that did not contain corn syrup, this news is important to note and more studies need to be done to determine why corn syrup based foods even contain mercury.

If you are pregnant, nursing, have children, or are concerned about introducing heavy metals into your system and the health risks, you might want to take note of this study and find alternative choices.

Manufactures are getting wise to the effects of high fructose corn syrup and its link to diabetes, obesity, and other health ailments so you do have alternatives.

You may also appreciate Cheney and Ellis’ documentary