Medical marijuana has been touted as the solution for everything from cancer to epilepsy, but it is beneficial for more than just ailments of the body — cannabis can be used for mental health conditions, as well. In the following article, Corrine Keating expresses interesting views on potential benefits, yet you should obtain medical advise before deciding to pursue medical Marijuana. So what are the potential benefits cannabis have for mental health?

“Reefer Madness,” the anti-marijuana movie from 1936, sparked the idea that marijuana was a gateway drug — a drug that encouraged people to use stronger drugs in the future. This couldn’t be further from the truth. Not only is marijuana not a gateway drug, it can actually help prevent addiction and make it easier to stop taking harder drugs.

It helps reduce pain, as a study in 2015 found, and an earlier study found that states with a fully established medical marijuana program experienced 25 percent fewer opioid-related overdose deaths. Instead of acting as a gateway to the use of harder drugs, cannabis has started acting as a gateway toward recovery.

Anxiety is a tricky mental illness, one that can be difficult to treat because of the variety of symptoms each person can experience. In some individuals, medical cannabis has been found to reduce symptoms and make other treatments more effective. This may be due to the fact that anxiety appears to affect the body’s natural endocannabinoid levels.

These naturally produced compounds are very similar to the cannabinoids that are found in marijuana, and shortages of these compounds have been observed in the brains of people who have been exposed to traumatic events and high levels of stress — both of which are often observed in patients with anxiety disorders. It’s possible that marijuana helps restore these endocannabinoids levels in the body, but more studies need to be completed before this will become an effective treatment option.

Unfortunately, of the 79 open medical marijuana studies in the United States, only 18 percent of them are studying the effects of marijuana on mental illness. Clearly there are benefits, and changes need to be made if we’re going to reap all the mental health benefits. 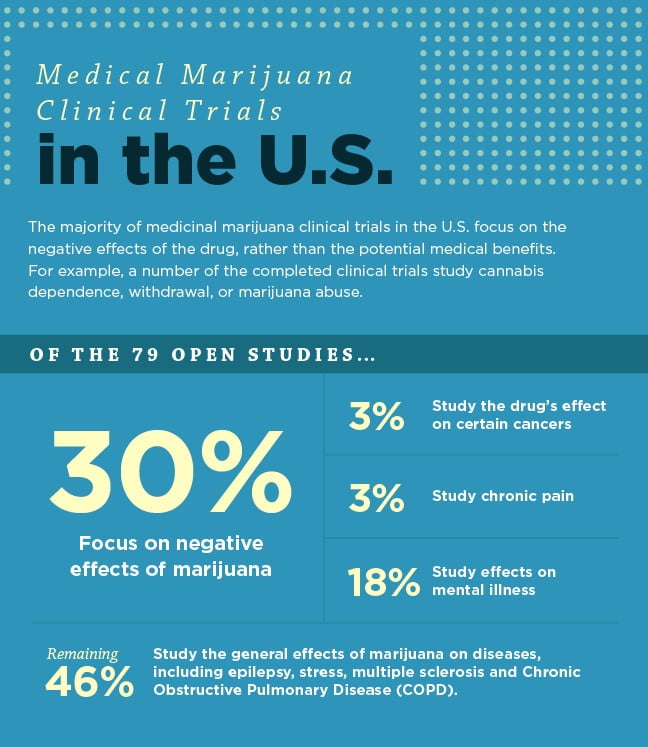 Bipolar disorder is characterized by extreme mood swings from depression to mania and back again. The severity of these swings is determined by a variety of internal and environmental factors. There has been a significant lack of research when it comes to the use of medical marijuana for bipolar disorder, but a recent study has shown there could potentially be mood-regulating benefits from the use of cannabis.

The study found that bipolar individuals reported a reduction in their mood-related symptoms each time they used the drug. The small size of the study — only 56 individuals — limits the impact it might have, but it does open the door to further studies.

Depression is one of the most frequently diagnosed and heavily studied mental illnesses — depression affects more than 15 million adults every year.

Depression, especially when caused by chronic stress, is another condition that negatively affects the brain’s endocannabinoids. Utilizing marijuana as a treatment for depression may help replenish these compounds, and while not curing depression, it can definitely ease the symptoms and take the edge off.

It’s important to pick the right strain for you when it comes to mental health benefits. Some strains have more THC or CBD than others. High THC strains, for example, have been found to increase anxiety and paranoia in patients already prone to these behaviors. For mental health, a lower THC strain or a strain with high levels of CBD would likely be the most beneficial.

The data surrounding marijuana use is growing by the day, but it is stunted in the United States because it is still considered a Schedule 1 drug by the federal government, putting it in the same class as heroin, LSD and ecstasy. Here at home, we’re completing a mere fraction of the research into cannabis benefits. Globally, countries like Israel and the Netherlands are far ahead of us when it comes to quantity of research.

Medical marijuana can potentially have great mental health benefits — we just need to complete enough studies so the medical community can see those benefits and pass them on to patients.

Corinne Keating is a health journalist who is passionate about physical and mental health. Find her writing for Leafly, Mind Body Green, The Huffington Post, and her own blog, Why So Well. Follow @corikeating to read more of her work.

This article does not reflect the view of Healthynewage.com, but rather that of researchers and contributors.