The Law of Attraction: Basics Teachings of Abraham by Esther and Jerry Hicks

Books on abundance are thick on the ground, each offering their own take on the power of positive thinking.

The Law of Attraction: The Basics of the Teachings of Abraham (Hay House) provides us with Esther and Jerry Hicks unique and sometimes controversial view on the subject.

Abraham is not a biblical figure in this context. Abraham is, in fact, a group of non-physical spiritual teachers who channel their lessons through Esther Hicks. Over a period of ten years the guided messages Hicks has been conveying continues to refine. This book represents one of the first to culminate the three “laws” of Abraham. In addition to the law of attraction, the other two are the power to deliberately intend and the law of allowing.

What Goes Around Comes Around 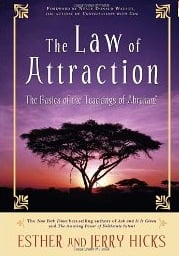 Hicks builds substantially on the “you get back what you give out” philosophy of life. The teachers of Abraham take this to a contentious level in The Law of Attraction.

They contend that each one of us is the leading edge of thought seeking uplifting experiences here on Earth; that we chose to be here because of the freedom and joy possible and that the potential to create and to attract what we want is only a thought away.

Some critics slam Hicks and the Abraham teachers for their insistence that people actively avoid the suffering and negativity of others. This, they say, is burying your head in the sand for the sake of feeling good. Another view is that much of what Hicks has channeled is quite sensible advice. Exposing our senses to a constant barrage of the disempowering and limiting types of stimulus can weigh on us, eventually creating an attitude that overpowers us into a direction that we do not really want or need to go.

Esther and Jerry Hicks have produced a fascinating volume in The Law of Attraction that is an excellent book to add to your Abraham books collection. Not only because of the origin of the source material, but because they end up with an abundance book that is not a clone of all the others.

The Law of Attraction in Action Series 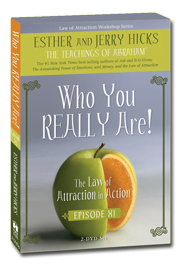 With the huge success of their initial book, Hicks developed a video/DVD series on the nuts and bolts of reality creation. The series builds on the law of attraction concept and premise that the magic key of manifesting what we want is to keep our vibrations elevated—to “be as happy most of the time, as much as possible.”

By watching each of the Law of Attraction in Action (Hay House) DVDs and experiencing the dynamic energy, viewers will begin to feel their lives shifting in a new, more positive direction almost immediately.