How smartphone apps are turning workouts into fun activities

Nowadays, software engineers are taking advantage of the technologies offered by smartphones (MP3 players, accelerometer and GPS) to create fitness games that are more appealing to people who easily lose interest over time. These apps immerse the user into a world that involves more than one sense (touch, hearing) in order to motivate him even more.

Jessica Matthews, has also noticed that fitness games have turned out to be a trend. People prefer to have fun rather than having to workout. Turning the workout activity into a fun experience turns out to be something positive. Matthews is an exercise physiologist for the American Council on Exercise. She acknowledged the fact that human beings are looking for more play opportunities as opposed to working out. So the best way to get them moving is to find a way to make it enjoyable. Even fitness instructors today have been encouraged to include game play in the whole exercise experience. 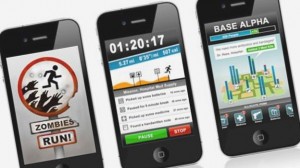 There is one popular game that is making wave currently and that is Zombies, Run!. In the game you represent a supplies runner in a world full of zombies. You are expected to provide supplies to communities hiding behind walls to protect themselves from the walking dead. To play, you just have to plug in your headphones and start running. As you jog, you pick up supplies for the communities. As the game story unfolds, you will eventually bump into zombies. To avoid them you will have to increase your pace or drop some of the supplies behind you.

Once the jog is over, the amount of supplies that you were able to pick can be used to fortify your community. The statistics from your run are also uploaded to the game’s website. You can always keep track of how you are doing and compare it to your previous records.

There are other fitness games available too.

Another one is called BullDash. Instead of having zombies chasing you, this time you find yourself in the middle of the running of the bulls in Pamplona, Spain. You can also try Fit Freeway which will turn you into the engine of a race car. Being the engine of the car, the only way for you to accelerate it is by running faster.

Then there are fitness apps that integrate the social aspect of life. Examples of such apps are Teemo, Nexercise and Fitocracy. They allow you to share your workout online for your friends to see. There are apps that require that you work with friend to achieve a common goal. For example you can organize a relay race through the app.

Matthews underlined the importance of having the social components into sports apps. Having to exercise with other people based on friendly competition will maintain the motivation needed to keep on moving.

The president of the American Heart Association, Donna Arnett, said there is already some amount of evidence showing that gadgets like accelerometers can re-candle the interest in certain people for physical activities.

If you have not already tried any of those apps, maybe this is the time. Some of them are free so go to the Apps Store and check them out.