There are over eighty different forms of autoimmune diseases, including multiple sclerosis, the debilitating disease that left Dr. Terry Wahls confined to a wheelchair.

Wahls undertook thorough research into the triggers of her disease, and eventually postulated her own intense nutrition-based treatment plan.

Following six months of her self-imposed therapy, Wahls rode a bicycle for the first time in nearly a decade. Her dramatic turnaround inspired the Food as Medicine DVD series, in which Wahls addresses her theory and a number of other topics on the important food-health link. 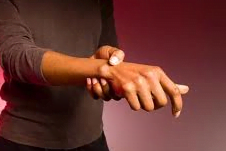 Numerous autoimmune diseases are triggered when the body’s immune cells attack the very cells they’re supposed to protect. The healthy immune system protects the body from invasive viruses or bacteria by responding with antibodies. Normally, the immune system is capable of determining good versus bad cells.

While it’s not certain what triggers autoimmunity, many links have been made with a person’s genetics and environmental exposure, including food. Autoimmune disorders can affect any person anywhere, but the common profile of a patient tends to be a minority woman in her child bearing years. Some estimates note that up to ten percent of all deaths of women 65 years and younger are attributed to autoimmune diseases. 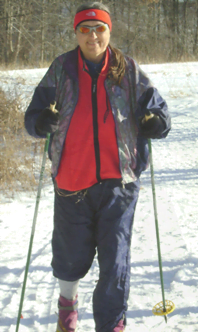 Wahls was diagnosed with relapsing remitting multiple sclerosis, and three years later this was reclassified as secondary progressive multiple sclerosis. As a doctor of internal medicine, Wahls was intrigued with the building blocks and factors affecting the development of this disease. After researching thoroughly on the topic, Wahls developed her own theory of treatment and implemented it on herself.

Six months later, Wahls transformed herself from confined to a wheelchair to an active, healthy woman. The treatment plan she undertook involved not only a strict nutritional plan, but physical therapy treatments and muscle and nerve therapy.

Wahls now focuses on proper nutrition and the unfortunate state of declining health across the country.

Food as Medicine, Part Two consists of lectures three and four—The Foods to Eat: The Actions to Take for a BETTER BRAIN and Autoimmunity and the Role of Food Allergies—of Wahls’ discussions on the vital link between our food choices and our state of wellness. 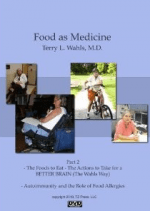 Viewers are shown in this extraordinary DVD the alarming data on poor nutrition habits, and how proper eating can help ensure our bodies and brain cells are fueled adequately to allow us to live a healthy life. Wahls discusses the information on the prevalence of autoimmune diseases in the United States, and how food choices can be used as a treatment of autoimmune disease symptoms with simple and easy to follow eating programs.

Wahls also shares with viewers in Food as Medicine, Part Two her story of transformation from suffering from multiple sclerosis to her current state of wellness. Wahls firmly believes that the food we as a society eat can either help or hinder our overall states of being by properly nourishing our mitochondria, or cellular fuel.

Proceeds from the sale of Food as Medicine, Part Two go toward research funding for nutrition and autoimmune disease treatments.

DVD on foods to eat and why, click > Food as Medicine: Part Two

DVD on foods to eat and why, click > Food as Medicine: Part Two

Subtitled: How I overcame secondary progressive multiple sclerosis (MS) and got out of my wheelchair