Fit at forty: from briefcase to bikini 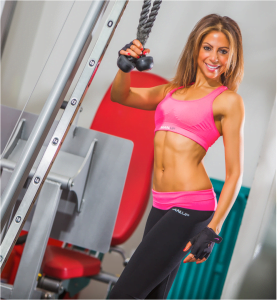 I worked as a high-flying sales executive in the City for many years, travelling between London, New York and Miami and enjoying the challenge of a fast-paced, high-pressured lifestyle. My passion and enthusiasm drove me to be the best: I was the stereotypical driven career woman who climbs the ladder all the way up, but where was I going? The Finance industry never turned me on and I was way too feisty to go along with all the corporate politics. Plus, it wasn’t all fun and games…I remember I used to get a sandwich at lunchtime and eat it at my desk. The rest of my calorie intake was made up of multiple vodkas consumed in the evening socialising with colleagues while bitching about management to unwind. That, followed by a good dose of stress, didn’t really add up to a healthy lifestyle. I was earning good money, but let’s face it, by the time I retired, I was definitely going to be ill and wouldn’t have a chance to enjoy it.

So one day, at the age of 40, a voice inside me insisted that there must be a greater purpose in life than serving the fat corporate cats, who at the end of the day, did not care at all about me. It became apparent to me that I was just a cog in the wheel, but that wasn’t enough for me. I was successful yet NOT fulfilled: I felt like the ultimate failure. Leaving the magical six-figure salary, the pension scheme, the perks of the job, my colleagues, and life as I had known it until then was a really tough decision. After much soul searching, I took the leap, left the rat race and its fat cats behind. It might sound a bit clichéd, but life for me really did start at 40, it felt like a new beginning – proving that age is just a number!

What next? I had a passion for health and fitness which had started a few years before thanks to many motivational sessions with my Personal Trainer. With his help, I quit the fags and binned the yoyo diets that had characterised my corporate life. Then I took it a step further: I wanted to be like the person who had so positively inspired me so I qualified as a Personal Trainer. This made me feel I was moving closer to where I wanted to be; however, I still didn’t feel fulfilled. By shifting the focus from brainwork to being physically active I created a different type of imbalance. I had gained a healthier self but lost some parts of me in the process. I felt the need to use my business brain again. Besides, the jogging bottoms and trainers were doing nothing for my glamorous side and sense of style. Let’s face it, I missed the high heels!

Following some research and the identification of a huge gap in the market, I launched a brand of classy fitness wear for women. The first season was very successful amongst trendy young women taking inspiration from our Ambassadors, glamorous personalities in the industry. Times got tough though as my savings were beginning to run out. The stress of working 24/7 made corporate life look like a walk in the park, and I wasn’t even getting paid for it! Reality hit me hard one morning when I woke up and realised that my leap of faith had taken a toll on my relationship. The trips to the gym had become a distant memory and instead of getting healthier I was getting fatter! Things had to change and quickly too! After months of sleepless nights and deliberating over investment on the table, I reluctantly decided to sell my shares in the business.

It’s at this point that I reached an all-time low: I’d broken up with my partner, my business had left me financially crippled and I felt I had failed. I’d given up a successful career, what for? I had no time for myself. I looked in the mirror and didn’t know who was staring back at me: I’d lost my self.

At this pivotal point, I signed up for a Tony Robbins event, which was life changing. For those of you who don’t know him, Tony Robbins is a motivational speaker and leader: his events are like attending a pop concert on amphetamines. For me, one of the key takeaways from Tony’s event was the importance of focusing my energy on my goal and making it happen. With renewed commitment, I decided that this time round I wasn’t going to let anything get between my goal and me, no matter what people thought. They say it’s never too late to live your dreams, so in July 2015, I entered my first bikini body building show, the Miami Pro European championships. If I’m really honest, it was about proving something to myself: I was facing my body issues bang on, some would say in an extreme manner. I’ve never liked my body, so putting it in a skimpy bikini in front of a huge arena of people to be judged was bloody scary, not to mention the fact that I had to pose whilst wearing high heels. At 44, I was up against women much younger than me. Was I too old to do this? Would I be laughed off?

Despite being a hard core gym fanatic, I still had a lot of work to do to be stage ready for the competition. A serious amount of muscle building and weight lifting goes into the physique, as well as on point nutrition. But I was determined. I radically changed my diet: the alcohol part was a killer; then learnt how to pre-cook and started planning my meals. I also had some training on how to pose professionally (pouty selfies are nothing in comparison). Unfortunately, I didn’t win the competition, but I demonstrated that it doesn’t matter what age you are, you can still look and feel amazing, powerful and strong.

People talk about their story – when asked before this turning point in my life I had never felt I’d achieved anything or reached anywhere close to my full potential. I didn’t even think I had a particularly interesting story to tell until I realised that you turn life into a story when you start following your heart. But this isn’t the end of my story, just the beginning as from now on I’m going to share with you some of the training and nutrition knowledge that I have learnt along the way and that has truly transformed both my eating habits and the way I think of food. So get ready to read about the life-changing secrets to a great body that you aren’t told about by the media. Don’t worry, it’s not rocket science! Along the way, I hope to inspire you to follow your passion and lead a more rewarding life, full of vitality derived from being healthy, fit and strong. I challenge you to prove that age is just a number as long as you are willing to continue to play the game we call life!

Sonya Morton-Firth is a fitness entrepreneur. You can visit her website here.