Performance Enhancement for the Modern Man

Earlier this month, FirmTech announced immediate availability of The Tech Ring (FTR), the first-in-the-world tracker for men’s sexual wellness.  By embedding smart sensor technology into a uniquely comfortable erection ring, this device is a breakthrough in enhancing pleasure and tracking the vital signs of erectile health for men of all ages. The Tech Ring can count the number of nocturnal erections – which can indicate vascular health and other medical conditions – the duration and firmness of erections, and force of ejaculation. Urologists commonly describe the penis as “the canary in the coal mine of vascular disease.” The Tech Ring’s sensors, Bluetooth and easy-to-use phone app technology will help men track these important sexual wellness metrics while wearing the ring either overnight or during sexual activities.

FirmTech founder, Dr. Elliot Justin, describes The Tech Ring as, “an EKG for your most sensitive and favorite organ.” Note that by age 50, nearly half of men report Erectile Dysfunction (ED) and that percentage increases 10% every decade after making ED a hardship endured by nearly 18 million American men. Dr. Justin and his team of experts know that tracking “Erectile Fitness” is a critical development in the medical field as instances of ED are often indicative of more serious, underlying health conditions like clogged blood vessels, low testosterone, obesity, diabetes, prostate cancer, hypertension, cardiac problems, psychological problems, or medication side effects. In fact, the majority of men who have suffered a heart attack also experienced Erectile Dysfunction in the years prior. Designed by a team of bioengineers and urologists, the Tech Ring will be available direct-to-consumer through their website and is also being explored by Urologists across the globe as an ED aid.  The FirmTech Smart Tech device monitors number of nocturnal erections, strength and duration of erection and force of ejaculation. The complementary phone app records, stores and transmits this data to the wearer which can also be shared with their clinician. 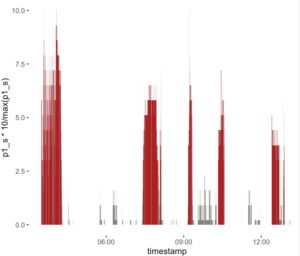 In the above graph, we see an increase in the firmness and the duration of an erection by a user wearing the FirmTech Tech Ring.

FirmTech also produces a Performance Ring which operates as a traditional erection – or constriction – ring.  The Performance Ring is great for men of all ages who are looking to enhance their erections by allowing them to stay harder, longer.  For men with Erectile Dysfunction, these rings can be useful tools as they restrict blood flow from returning to the body while maintaining an erection.  The FirmTech Performance Ring sets itself apart from the competition with its unique design.  While most erection rings are difficult to put on and made of hard plastic or metal, the Performance Ring can be put on erect or flaccid and worn comfortably for hours thanks to its unique, elastomer material, and can be easily adjusted with its patented hook-and-loop design.

Erectile Fitness and increased sexual function are not just important for men, but for their partners too.  Females may often find themselves wrestling with their own insecurities when their partner is unable to get or maintain an erection.  He is not unattracted to you or bored, he is likely struggling with a pre-existing medical condition, medicine side effect, or lifestyle choice such as too much alcohol. Studies have shown that increased sexual activity can improve sleep, increase brain function, decrease stress, boost confidence, and bolster relationships. Women know how hard it is to get our male counterparts to pay a visit to the physician. FirmTech allows male partners to start to track and address their ED without invasive appointments, medications, or fear of stigma. And as an added advantage, the location of the latch in both of the FirmTech’s ring designs can also optimize a female partner’s clitoral stimulation. And as a result, female partners can be  more satisfied – more frequently.

The expert team at FirmTech includes renowned female urologists. They know that sexual issues affect both partners equally.  Because ED can often be a symptom of serious conditions, talking to your partner is not only good for your sex life, it may also save a life. Sixty percent of men who end up in the ER with a heart attack reported that they had noticed signs of ED several years prior.

Dr. Amy Pearlman, Director of Men’s Health Program and Professor of Urology at the University of Iowa says, “sex toys and tools can be game changers in the bedroom for penis and vagina owners.  It’s time we normalize the use of these products to optimize performance and pleasure for men and women.  Sexual health IS health.  None of us need to be sick or broken to want to be and perform better.”

Dr. Justin, an Emergency Medicine specialist and consultant in the urology, cardiovascular and diabetes fields, intends for FirmTech to build products to help men stay firm and fit for life and love. While appreciating spontaneity, FirmTech believes in planning for pleasure, and being open-minded about boosters and aids like erection rings for better sexual performance.

Maintaining good erectile health at a younger age reduces the risk of developing ED later in life. In its flaccid condition, the penis does not have sufficient blood flow and oxygenation to keep penile tissues healthy. Without blood flow every 24 hours in the form of spontaneous nighttime erections or sexual activity, atrophy can occur, especially in older men. In short, having intercourse regularly may even help prevent the development of ED later in life.

The FirmTech team’s medical knowledge, sex toy experience and barrier-breaking philosophy sets its erections rings apart from the competition.  Firm Tech’s products are designed to help men stay harder for longer. While most sex toys and aids are made of hard silicone, the Firm Tech ring features soft elastomer which wraps around comfortably for firmer erections and increased pleasure. The unique latch-and-loop design makes it easy to take on and off around sensitive anatomy. Unlike rigid, single loop alternatives, FirmTech products feature two flexible loops: one for the base of the penis and one for the testicles and can be put on erect or flaccid – and can be worn safely for hours. This design allows for a secure but relaxed fit. “I am never going to take this off” said FirmTech’s first independent tester. Another user reported, “this is the best cock ring I have ever used.”

In an age of tech and health “wearables,” the FirmTech Team is excited to introduce these revolutionary “underwearables.” FirmTech can help men to elevate their sex lives from “good” to “great” while improving their overall physical – and mental – health. In a recent study, 50% of FirmTech wearers reported better orgasms, increased partner satisfaction and longer erections.

To “put a ring on it” and promote better overall health and increased sexual health, visit MyFirmTech.com.