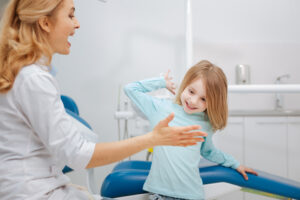 We are living through the Great Resignation, a period in which millions of Americans have quit their jobs, in search of better work-life balance, better pay, or the chance to start their own businesses. No industry has been left unaffected, including dentistry. Chris Simonsen is a reminder that a long career in dentistry is possible. This year, according to a story in Deseret, he celebrated his 50th year as a pediatric dentist.

How Did Chris Simonsen Get Started?

Dr. Simonsen is Utah’s first pediatric dentist. From the age of 12, he knew he wanted to become a dentist. He would visit dental offices to see what dentists were doing! His friends thought that was weird but each visit stirred his passion for the field.

After studying at Utah State, he moved to Marquette University to study for a doctorate in dental science (DDS). There, he realized that being a left-handed dentist came with its own problems. He had to do the reverse of what right-handed students were doing, and he sat on the wrong side of his dental chair, all of which made helping him very difficult for his professors. Nevertheless, he graduated.

While at Marquette, the Brigham City native met his future wife, Karen, who worked so he could go through dental school.

Where Has Chris Simonsen Practiced?

Dr. Simonsen began his career serving the U.S. Army for two years, treating soldiers being deployed to or returning from Vietnam.

After that, he returned to Utah, where he established his practice in Bountiful, where he has practiced ever since.

Since then, he has treated hundreds of children and their children too, including a famous jazz musician.

At one point, Dr. Simonsen worked with the Primary Children’s Hospital, training pediatricians about pediatric dentistry. He ended up receiving so many patients from the hospital that he had to close his practice to deal with the influx.

His preference has always been to build long-term relationships with patients, getting to know the entire family and growing with them.

Dr. Simonsen’s office has a dental chair specifically designed to make children feel comfortable.
Along his walls, there are benches for children to sit on.

His counters are filled with toys. Every nook and cranny is decorated with children’s artwork. The finishings would inspire anyone considering kitchen cabinet refinishing: they are warm, inviting and relaxing.

His dental office has seen two generations of patients. Few dental offices have as many memories as his. There are echoes of the patter of little feet, the memory of parents as they were decades ago. He enjoys his work and serving children has kept him happy and young all these many years. He is a testament that even in a field as difficult as dentistry, it is possible to build a long career.