Defining Celtic knot meanings is quite a difficult task, as very little documented proof is available from
the time when they first made their appearance, around 450 AD.

However, by comparing historical events that
happened within the region with Celtic knot work patterns that supposedly made their appearance at the same
time, we can develop a basic understanding about Celtic knots and their relative meanings.

Most of the Celtic knot drawings consist of Celtic circles and symbols that basically represent the mysticism
associated with the beginning and end of our physical existence. When you look closely, you will notice that
the Celtic knot symbols do not have a beginning or end, something that portrays the timeless nature of our
existence. Spiritually, the symbols reflect the connection that we humans have with the infinite universe
that seems to exist on the outside, but is actually present within every human being.

Some historians also
believe that the symbols represent an uninterrupted life cycle, wherein the soul continues to make its journey
from one body to another, until it attains nirvana and merges with the source of all things in this universe.

Although most Celtic knot symbols are based on the same basic theme, they have very different meanings. For
example, knots having continual looping patterns represent eternity and interconnectedness, whereas knots
with co-joined figures of humans and animals may represent the relationships between lovers, god and humans
or hunters and their prey. Some of the differences in their meanings are also based on changes that might
have occurred over the centuries. For example, modern Celtic knot designs are quite different and were mainly
used for the purpose of decorating Christian scripture. 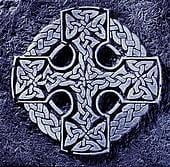 Some of the decorative knot symbols include linked
hearts, harps, the holy cross, shamrocks, and other symbols. To understand their real meaning, we can use
the thumb rule devised by prominent historians, which specifies that circles basically signify unity, spirals
signify the life cycle and polygon figures such as squares and rectangles act as protection against evil
spirits. The thumb rule may not provide the exact meaning or purpose, but it does provide a basic insight
into the mysticism associated with Celtic knot symbols.

Their actual meanings may vary, but they portray a sense of peace and calm and are increasingly being utilized
as designs for jewelry and even tattoos. They are also being incorporated on fabric and home décor
items, as it is generally believed they can ward off evil spirits, promote longevity and bring good luck.
They can also be incorporated on gift items, to increase the overall appeal. The symbols can be utilized
in many different ways. Their use is limited only by the imagination and creativity of the individual involved.

Celtic knot symbols may have lost their real meaning or purpose over a period of time, but they have certainly
not lost their charm or attractiveness. Moreover, the belief that they bring prosperity, further adds to
their importance. Based on their growing use in today’s modern age, it is not wrong to say that the Celtic
knot symbols are here to stay for quite some time and grace the celebration of human existence.