One of the great lessons we have learned in the last two years is that businesses can thrive with remote teams. The rise of remote work means that the need for traditional office spaces has plummeted. Traditional offices can no longer pose as the best places to be productive, and the health and safety risks of working from a traditional office have never seemed clearer. Yet, for many workers, their homes are not sufficient as workspaces. Coworking spaces have emerged as a viable option for these workers. 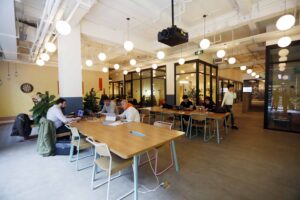 Coworking spaces provide all the tools that traditional offices do, such as conference rooms, printers, WiFI, workspaces, and even coffee and snacks, without requiring a long-term rental commitment on the part of its users. This makes them very popular with remote workers, who may only need to use their facilities for brief periods. For instance, a remote worker may need a conference room for an important meeting. Coworking spaces can be rented out for as long as you need them. That could be for a day, a month, or a year. You determine the extent of use. And for short rental periods, you don’t have to sign a lease.

Co-working spaces have obvious benefits. We have mentioned the flexibility of agreements. By turning fixed costs into variable costs, coworking companies can democratize access to office space and help firms build more decentralized structures by providing them with office spaces they can pay for only when they need them.

Coworking spaces help remote workers as well as nomadic workers -who travel as they work-, so that they have all the tools they need to do their jobs well.

However, the promise of coworking spaces has crashed against reality. Before the pandemic, coworking companies seemed to offer a dazzling vision of the future, but today, they look like a relic of the past. The pandemic forced many workers to work from home, and that meant that many workers who used coworking spaces did not renew their leases. Coworking firms such as WeWork have shed workers and themselves tried to renegotiate their leases in order to stay afloat.

Coworking spaces are perhaps even less safe and healthy than traditional office spaces. A coworking space, unlike a traditional space, has to maximize its use of space in order to make money. This is because coworking companies have fixed costs in the form of their rental obligations to the landlords of the buildings they let, but their income is variable. In times of economic stress, the pressure on finances can be insane. So coworking firms have more of an incentive to try and get as many people as they can into a building than traditional real estate companies who match fixed obligations to landlords with fixed long-term rental agreements.

The positives of coworking spaces have to be weighed against the negatives. Many coworking firms are not as diligent in fixing problems as traditional landlords. Again, their model means that they are under immense pressure to keep costs low. Most don’t make any money. In searching for the best corporate meeting space, you have to look at the full picture before deciding what kind of space you need.